Figures released by police reveal that 269 people have been stopped and searched in Waltham Forest since the launch of Operation Kartel last week. So far a total of eight arrests have been made. Those arrested were charged with a variety of offences, including carrying an offensive weapon.
(Waltham Forest Guardian, February 21 2008)

Got that? The police stopped and searched 269 local people and 261 were guilty of nothing. This is a police force which only has time to nab 5 drivers a day for driving with a hand held mobile phone, even though the Borough's streets are very visibly crammed with these prospective killers. Life-threatening lawless driving is a low policing priority.

And carrying an offensive weapon which can kill or cause grievous bodily harm to child pedestrians and cyclists will attract no police attention at all - not if it looks like this. 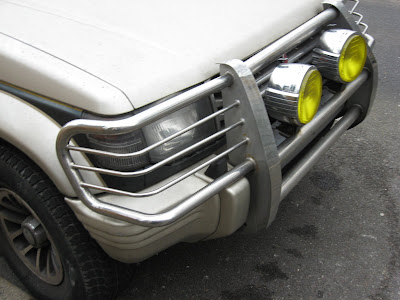 Posted by freewheeler at 20:36