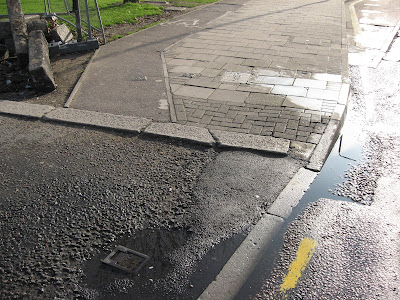 The idea of a cycle lane that bypasses the traffic lights outside the greyhound stadium, enabling cyclists to go off-road and not be held up by the red phase, is an admirable one. But as I have previously pointed out, there is a serious design flaw where the lane rejoins the carriageway, bringing cyclists into potentially fatal conflict with vehicles.

These photographs show the start of the lane. It is not signed. No one who was not familiar with the road would have a clue that they have the option of cycling in the lane on the left, or where it led. Nor is it even flush with the road surface: as you can see, you hit the edge of a kerb at the start of the lane. And it starts inside an entrance used by vehicles. And lastly, note the water hydrant merrily bubbling away in the foreground. That's Thames Water up to its usual money-saving non-maintenance strategy, ensuring another sheet of ice when the temperature drops below zero.

The photograph below is taken looking back at the entry point from the lane. Note the faded condition of the markings. Another substandard facility for the great cycling renaissance! 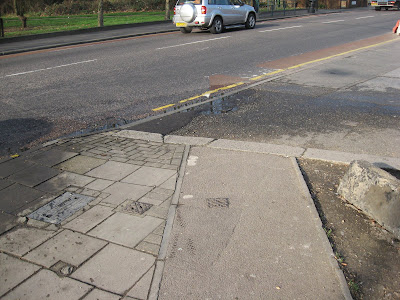 Posted by freewheeler at 21:30