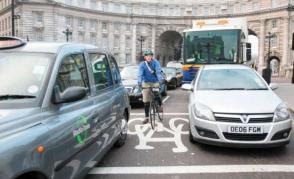 The extent to which cycling has taken off in London in recent years is staggering. The congestion charge, environmental awareness, a desire to keep fit, a fear of terrorism, the freedom and sheer convenience are all reasons why numbers are reckoned to have doubled since 2000. Even on these cold winter mornings we cyclists are creating our own unique brand of congestion at key hubs around the city. In the summer, the streets of London at rush hour will teem with cyclists.

But cycle journeys still represent only 1 per cent of all daily journeys in London, and the mayor's aim is to increase that figure to 5 per cent by 2025.

Interesting article by Simon O’Hagan in the Independent.

As someone who both cycles and drives in London, I remain sceptical, especially when measures such as advance stop boxes – spaces at traffic lights designed for the exclusive occupation of cyclists – seem to have no effect on motorists' conduct.

I, too, remain sceptical about any grand scheme to promote cycling which does not address the lawless behaviour of drivers and the reluctance of the Metropolitan Police to enforce traffic law.
Posted by freewheeler at 12:20