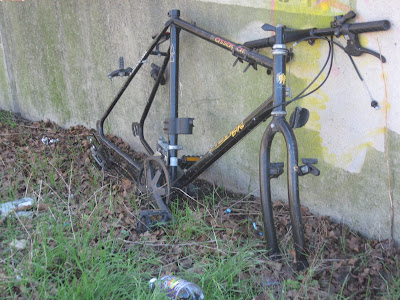 Spotted today alongside a section of the London Cycle Network.

London is likely to become one of the most cycle-friendly places in the world, with a series of two-wheeler superhighways cutting a swath through traffic and congestion.

Likely to become one of the most cycle-friendly cities in the world? I would say that is very, very unlikely.

The London initiative is based on a successful scheme in Aylesbury, one of Cycling England's six demonstration towns where more people have taken to their bikes.

Well done the Guardian for sending one of their reporters to Aylesbury, the cycling paradise. Her account of cycling there makes interesting reading.

Rubyway is signalled with ruby pavement markings and runs in red strips along both sides of the Bicester Road, a highway chiefly remarkable for its used car showrooms. But Rubyway comes to an abrupt end at the Meadowcroft housing estate, and I have still to see anything on two wheels.

The Aylesbury model turns out to be hard going, because frankly, the roads are grim suburban bypasses rumbling with pantechnicons. Rubyway turns out to be the plainest of them all, so I head for Amberway instead. I'm doing very well until the cycle path disappears so precipitously that I am nearly sucked into an underpass. Outside another retail park I get chatting to Randal Cheney, on his way to work as a security guard for Tesco. He cycles into town most days from the outskirts, and is delighted with the improvements the scheme has made. "But it would be nice to have some more paths, because you've got the main ones from outlying areas, but none of them link up."

The Guardian reporter’s experience casts some doubt on those statistics which claim there has been a major surge in cycling in Aylesbury.

But the London Cycling Campaign is thrilled:

London Cycling Campaign welcomes the step-change in political commitment. LCC Chief Executive Koy Thomson said: “While the target for a 400% increase by 2025 is not new, the shift in political leadership and vision is. Cycling is emerging both as a major public transport mode and as a mark of a modern cosmopolitan city at ease with itself and its global responsibilities. All of the major Mayoral candidates have rightly identified cycling’s strategic role in transforming London. Ken Livingstone has set the bar high.”

Frankly I don’t think any of the Mayoral candidates has shown any credible interest in cycling.

“The key is in the delivery, both this new programme and the previous commitment to complete the London Cycle Network Plus. We will be looking for changes in Transport for London’s management and spending structures to reflect cycling as the fourth transport mode alongside buses, trains and tubes. We are also looking to the Mayor to drop his support for a proposed law to enable council officials to forcibly remove parked cycles from railings. This will stop dead the growth in cycling.” said Tom Bogdanowicz, LCC’s campaigns manager.

There is also the problem of the transport culture in which Livingstone operates.

London4Bikes sees the need for a West-East route, for example, but had this response from Sustrans:

It is extremely difficult to get TfL and the boroughs to reduce road capacity for cars. And one of the reasons that they cite is the current relatively low levels of cycling compared with other modes. This is obviously a frustrating chicken and egg situation.”

The Independent’s cycling correspondent is enthusiastic but wonders if it will ever happen:

One of my main frustrations is having to choose between slow cycle routes or dangerous main roads. A cycling corridor could wipe 10 minutes off my commute and make it much more enjoyable. My only fear is that such a project may be impossible to deliver in an old city like London, where the streets are narrow and planning bureaucracy unwieldy. To work properly, the corridors would need to be at least twice as wide as current cycle lanes and unhindered by traffic signals every few hundred metres. Given that most roads are too narrow to fit car, bus and adequate cycle lanes, it will be very hard to find the 12 new routes. One solution would be to remove cars altogether from some central arteries, turning bus lanes into cycling corridors and car lanes into bus lanes – but that may cause chaos elsewhere in the city.

It’s not true that displacing traffic necessarily leads to increased congestion. The City’s ‘ring of steel’ did not displace traffic, it reduced it overall. Some drivers gave up and found alternatives.

London certainly could become a cycle friendly city. But two major obstacles stand in its way. Firstly, any improvements will require removing road space currently dedicated to motor traffic, which means doing battle with a highly vocal road lobby and a media culture which encourages drivers to regard themselves as victims. All the main political parties are in thrall to the road lobby, and the recent case of the SNP abolishing road tolls on all bridges in Scotland shows yet again that indulging drivers is seen as a vote winner.

Secondly, a major deterrent to cycling in London is aggressive, dangerous driving which is widespread. Dealing with that would require a major transformation in the culture and operations of the Metropolitan Police, which is institutionally apathetic about bad driving and has historically never regarded driver crime as ‘real’ crime. Even if it was to be achieved, ‘Critical mass’ cycling does not in itself necessarily result in safe cycling as this appalling case showed.

There’s also a question of definition. There are many types of London cyclist, each with different requirements. There are daily commuters who travel from the suburbs into central London or vice-versa. There are daily commuters whose routes cut across the radial routes. There are non-commuter daily users who cycle to go shopping, visit friends or places of entertainment or restaurants. There are commuters who want to leave their bikes at stations. There are children cycling to school. There are leisure cyclists who appear at weekends. It seems to me far from clear what practical benefits will accrue to each of these cycling groups from Livingstone’s plan. In general terms it all sounds fabulous. But on past experience and bearing in mind the existing state of things, I think a large measure of caution and scepticism is advisable.
Posted by freewheeler at 20:45