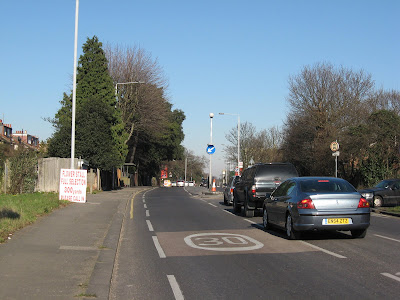 ONE of London's most dangerous roads for cyclists runs straight through the heart of Woodford Green, it has been revealed. According to figures released by Transport for London, (TfL), 337 cyclists were injured between 1996 and 2006 on the A104, much of which is made up of Woodford New Road and the High Road, Woodford Green.

That’s an amazing statistic, is it not?

No surprise to read of

A fat lot of good that will do, when the problem is reckless, lawless driving. The photograph above shows a traffic island on Woodford New Road at the junction with Chelmsford Road. Ever since it was installed, drivers have regularly been crashing into it. Or as the local paper recently quaintly put it, it "claimed another victim". Yes, drivers are regularly victimized by inanimate objects.

Gill James from the London Cycling Campaign's Redbridge group said it wasn't enough. She told the Guardian: "It is a very fast and quite dangerous road and I think it's only safe for confident cyclists which is a shame because there are so many schools along there that children could cycle to, but people do not want their children cycling on such a busy road. I would like to see a separate dedicated cycle route which was really safe, then we wouldn't get so many parents driving their children to school, making the traffic worse."

The problem with that line of argument is that it solves road danger by removing cyclists from the roads instead of addressing the source of the danger. And in a city like London off-road cycle lanes are rarely possible in dense urban areas.

Danger reduction for cyclists is a political, not a technical problem. It’s an absurdity that cars are manufactured and sold to go at speeds twice the maximum speed limit, it’s an absurdity that speeding is generally regarded as a minor offence, and it’s unacceptable that the Metropolitan Police have massively reduced their traffic police numbers and no longer regard motoring offences as being a key area of policing.

Trinity Catholic High School headteacher Paul Doherty, who has been cycling for 26 years, said he avoided the A104 because of its reputation. He said: "The speed of the traffic is far too dangerous… It is not as safe as it once was, and as a cyclist, I feel that it is not getting better, it is getting worse."

It is getting worse. And that’s why expectations of a massive rise in cycling in London should be regarded with deep scepticism.
Posted by freewheeler at 09:22