My blogging is a little late today, interrupted by a 97 bus crashing into the Walthamstow branch of McDonalds, on Hoe Street, and by a spot of bother with the law, who demanded that I delete all the photographs I'd taken. I refused.

First of all, here are the pictures which the Metropolitan Police (in the shape of Police Community Support Officer JC 206) didn't want you to see. 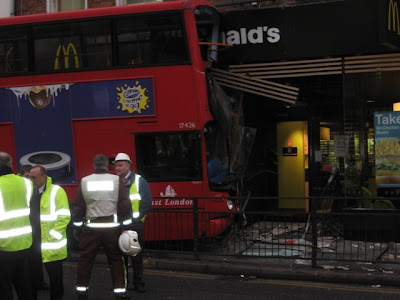 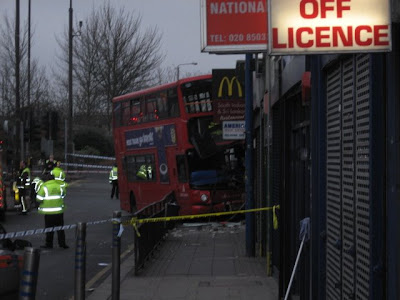 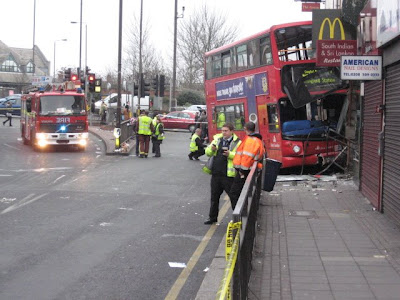 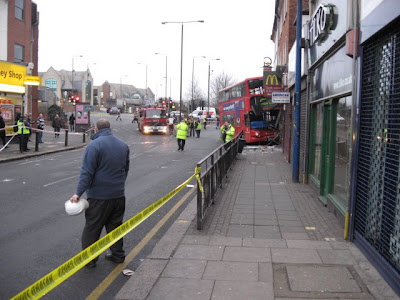 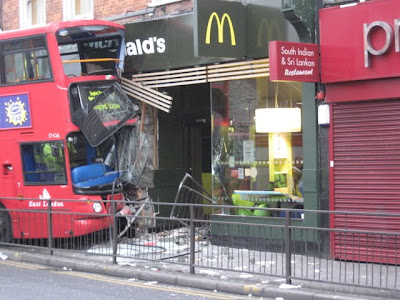 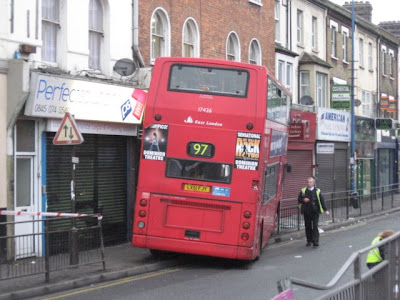 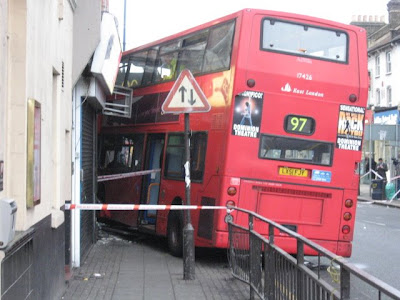 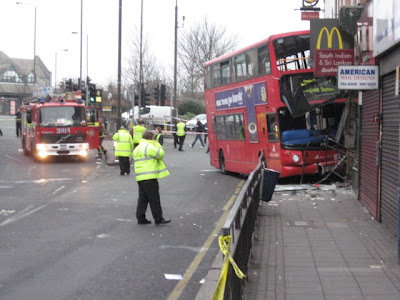 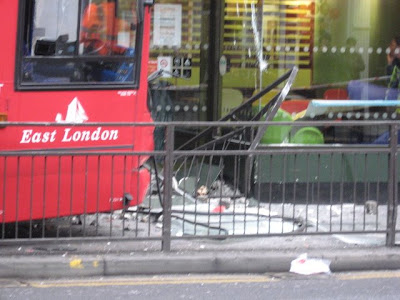 (Below) Debris was thrown across Hoe Street to the far side. 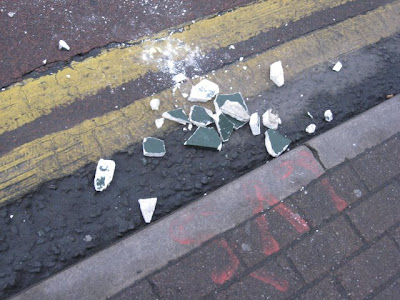 (Below) The morning rush hour. Out come the mobile phones... 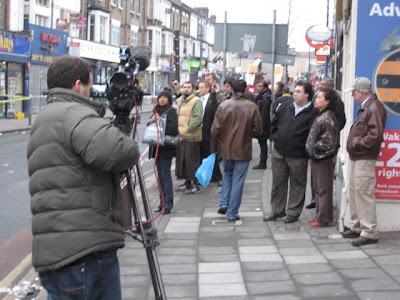 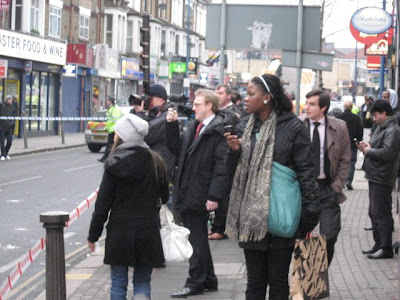 My problems with the law only started after I'd taken photographs at the crash site. The cops there were cool about people taking pics. The police also didn't have much choice, because as long as people stayed behind the emergency tape no offence was being committed, and besides there were scores of local people snapping away, plus press photographers, plus TV crews.

I went off to the junction of Hoe Street and High Street to take some snaps of the deserted street and the traffic jams (which I haven't used since they are not very interesting). That was when my difficulty began. Police Community Support Officer JC 206 saw me taking snaps and came running. He shouted at a colleague to detain me. He then approached and demanded: "Why are you taking photographs of a crime scene?"

Now in the first place it was a very silly question, as Hoe Street was full of people taking snaps for a bleedin' obvious reason. It's not everyday you see a double decker bus wedged into the front entrance of McDonalds. In the second place his question was presumptuous. The crash site is not a crime scene until it is deemed that an offence has taken place. It was a single vehicle only crash and it may quite conceivably have been a genuine accident (e.g. the bus driver being suddenly taken ill).

In the third place, it is not an offence to take photographs in a public place. I was not committing any kind of offence and the PCSO had no grounds at all for speaking to me.

My indirect reply was that other people were taking photographs. The PCSO said he hadn't seen anyone else taking photographs. The PCSO then demanded that I delete all the photographs I'd taken. I refused. His demand was entirely lawless, apart from being absurd and unreasonable. There are no lawful grounds for demanding that someone delete photographs on their camera or mobile phone. What's more not even a police officer can confiscate a camera without a court order.

He asked if I had ID on me and what my name and address was. I asked why I should supply it to him. At that moment a man with a very large camera materialised beside us. I pointed out to the PCSO that here was someone else taking photographs. The PCSO asked if he was press and was shown the photographer's press card. I told the photographer that the PCSO was giving me a hard time for taking photographs and the press man said very vigorously that anyone can take photographs in a public place. He produced a legal advice card and urged me to get in touch in case of difficulty.

The PCSO backed off in the face of what the press photographer had said. I was required to wait with his colleague while he phoned for advice (presumably from the real police). Eventually I was informed I was free to continue taking photographs.

Had I not stood my ground, you wouldn't be seeing these pics.

Now although the exchanges between the PCSO and myself were perfectly polite, I bitterly resent what happened. The basic problem with PCSOs is that (i) they have an inflated sense of their own importance (ii) they lack the common sense, experience and professional knowledge of the law that a police officer possesses.

Experiences of this sort are a good way to alienate local residents.

As for the bus crash. There's a news report here.
Posted by freewheeler at 12:05