A follow-up to yesterday’s post on Sustrans. Explore all the local Greenways documentation and maps here.

The North East Greenways material, both on-line and hard copy, is surprisingly sloppy for a multi-million pound organisation. There is reference to “quite, traffic-calmed and tree-lined residential streets”. Obviously Sustrans means “quiet” but no one has noticed. I have a copy of the North East Greenways leaflet which asks “What is a Greenway?” It states A greenway will have numerous links to connect its main route with local places and communities, and it may follow separate strands for

For what? The leaflet ends in mid-sentence. Astonishingly sloppy for what is supposed to be a professionally produced document.

The section on Waltham Forest refers to the “Greenman” roundabout and has obviously been written by someone who neither knows the area, nor ever walks or cycles in it. I shall have sport with some of Sustrans’s gushing descriptions of local facilities later in the week.

Sustrans originated in Bristol. And unfortunately for Sustrans there are some formidable bloggers in Bristol who are none too impressed by this high-profile green organisation.

Bristol Traffic draws our daily attention to the atrocious conditions for cyclists and pedestrians in Bristol. This, for example. A major cycling and walking crossover point, without any crossing facility. The car is king. The car must come first. 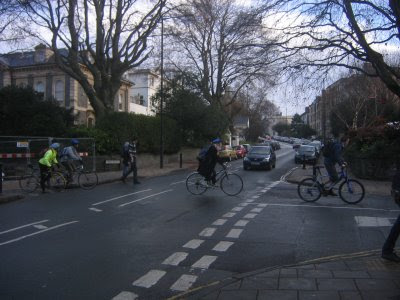 This junction is not only Sustrans national network route 4 but is the primary by-foot commute for a few thousand students.

There’s a blistering (and to my mind very persuasive) critique of Sustrans here:

A significant proportion of the cycling community seems to disagree with the aims and objectives of Sustrans, let alone the practical effects of its work. So why don't these objectors join the organisation and have a say in the way it's run?

Put simply, Sustrans, a registered charity, is a company limited by guarantee. In other words, it has no shareholders, just members. It's run by a group of (currently eleven) trustees who are appointed by the members of the company. The members of the company are the existing trustees, which means that the existing trustees appoint their successors.

More about Sustrans tomorrow.
Posted by freewheeler at 07:07