A second quantum of Greenwash 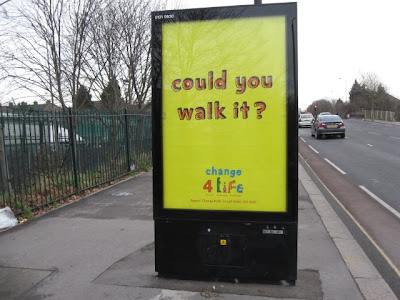 This walking poster is the twin of that cycling one.

Could you walk it? Yes, you could, but why would you want to? The pedestrian environment is degraded in all kinds of ways, including street clutter such as obstructive and unsightly advertising panels like this one. Apart from that, this particular stretch of the A503 is a four-lane high speed carriageway, where drivers flout the speed limit, chat on mobiles, 'lose control' and have spectacular crashes on a fairly regular basis. And if you keep walking here as far as the junction with the A104 you'll discover that there is no crossing facility for pedestrians, meaning that you have to make a long diversion into the rat-infested labyrinth of underpasses at the Waterworks roundabout.

Meanwhile, another crap health quango has come up with some fatuous suggestions for combating obesity and lack of exercise among young people:

Dawn Primarolo, minister for public health, said: “I welcome the new guidance from NICE on getting children moving and playing. It complements our Change4Life campaign to get everyone to eat well, move more and live longer.It’s creating a lifestyle revolution on a huge scale — something which no Government has attempted before.”

No, Dawn, it’s not creating a lifestyle revolution, it’s issuing a press release. One which will belong on the garbage heap of history, along with all the other instantly disposable speeches of Ms. D. Primarolo.
Posted by freewheeler at 07:45