And I certainly wouldn’t disagree with use of the word “fantastic” in relation to local cycling facilities, since according to my Oxford English Dictionary it means “extravagantly fanciful”, “capricious”, “eccentric” and “grotesque or quaint in design”.

The Blackhorse Road crossing is certainly the kind of facility which cyclists need. It involves a cycle lane through a road closure on Maude Road E17. On the Glenthorne Road side it involves a right-turn only lane for drivers, and a cycle lane for cyclists wishing to cross Blackhorse Road. For reasons of local geography I would guess that no cyclists turn left or right here, because there are more attractive options for cycling in those directions. This dedicated cycle crossing has lights, and you don’t have to wait very long for the green phase, unlike, say, the dedicated cycle crossings on Lea Bridge Road at Orient Way and College Road.

But this otherwise excellent facility contains one design flaw, namely that at busy periods it is obstructed by stationary traffic on Blackhorse Road, usually backed up from the pedestrian lights at the junction with High Street. Sometimes, as in the photographs below, the obstruction comes from the other direction. Look carefully. In the first photograph the lights are at green for the People Carrier but it is at the tail end of a traffic jam and is stationary. In the second photograph the lights change and the white truck moves forward on the green phase. But the truck can't get out of Glenthorne Road because of the People Carrier, and any cyclist wishing to cross Blackhorse Road at this "fantastic" facility would likewise be unable to do so. In the final picture the truck is still obstructed by the People Carrier and is now itself obstructing the footway. Fantastic indeed. 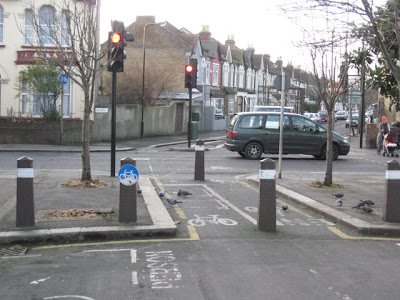 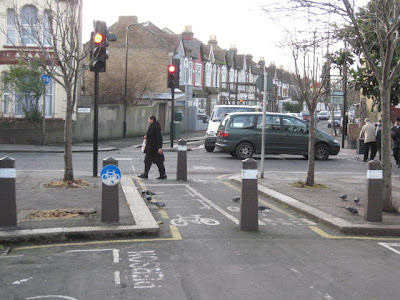 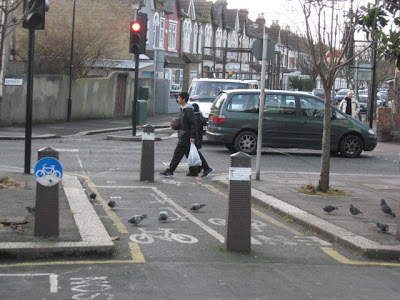 What are needed here are the yellow cross-hatched markings which make it unlawful to wait on them. Such markings, of course, are only ever provided at road junctions to deter drivers from blocking access for other drivers. They are never provided at signalled pedestrian crossings and they do not seem to be provided at any cycle crossings. This is just another example of the institutional design discrimination against walking and cycling which permeates the entire national transport network. You can wait in a traffic jam in a vehicle and block signalled pedestrian crossings or cycle crossings with impunity.

There are subsidiary problems with this “fantastic” facility. The signing to it from both directions is of a very poor standard and badly maintained. Much worse, is that to get to this crossing from either side you have to cycle along roads where rubber speed cushions have been placed dead centre of the carriageway. This means that motorists coming towards you swerve towards your side of the road in order to avoid their wheels having to go over the cushion. Rubber speed cushions are a design disaster for cyclists, but although the council seems to have belatedly recognised this, it has no plans to tear them up on the numerous residential streets which already have them.

Finally, “fantastic” facilities like this one are simply little islands of relative good practice in a sea of bad design and a raging ocean of driver bad behaviour and lawlessness. Drivers break local speed limits in the London Borough of Waltham Forest in their tens of thousands every day. The streets are crammed with drivers chatting into mobile phones. Advanced Stop Lines for cyclists are regarded with contempt by innumerable drivers. Sustrans has nothing to say about such realities. Its twee backstreet residential routes shown on the Greenways map are just as unpleasant to cycle on as any other. I laughed hollowly seeing that one route incorporated a section of James Lane E10, which is a particularly lethal and unpleasant road to cycle on. The 20 mph speed limit there is surely flouted by 100 per cent of the drivers who use it, and the rubber speed cushions encourage erratic and threatening driver behaviour against vulnerable road users like cyclists. The notion that cycling is going to blossom in such conditions is indeed grotesque and extravagantly fanciful.
Posted by freewheeler at 10:06