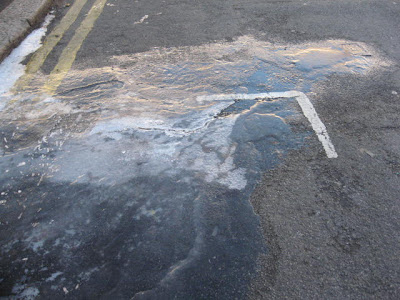 (Above) Shaftesbury Road E17. All photos in this post taken yesterday afternoon.

With the below-zero temperatures, the roads and pavements of the London Borough of Waltham Forest have numerous lethal patches of ice, which are all a result of water leaking from pipes under the control of Thames Water. This is a company which loses about 170 million litres a day through leaks. Ofwat, the Water Regulator, has always bent over backwards to be nice to Thames Water. In 2006 the Daily Mail reported:

Under laws introduced in April last year, it could have fined the company up to £66million, or 10 per cent of sales from its water business. Not only did it not take that action, but in a further controversial move it changed Thames's leakage target.The company will now be allowed to leak an extra 7.7million gallons of water every day for the next year above the current target.

Thames Water is currently owned by Australians, whose first duty is to their shareholders and their executive salaries, not to the people of Waltham Forest:

The Australians running Thames Water have paid themselves a £131m dividend at the same time that they are calling for a hike in customers' bills that could top 25% over the next five years. The payout, up from £102m in the prior year, comes as Thames is in the middle of negotiations with Ofwat in which it is asking the regulator for an increase by 2014 of 16% before inflation.That rise after inflation could see water bills in London leap to an unprecedented £360 a year.

The Council has a legal duty to maintain its pavements and roads in a safe condition, and it is legally liable for damage or injury to property or person resulting from its negligence. Elderly pedestrians are particularly at risk from icy pavements, and cyclists and powered-two-wheelers are particularly at risk from icy roads: A cyclist left fighting for her life after being run over by a Land Rover skidded on ice before the collision. 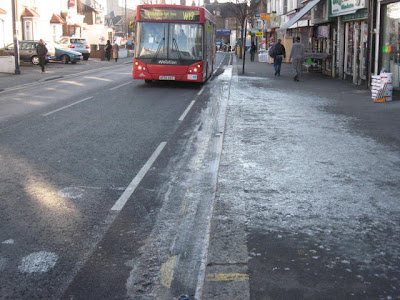 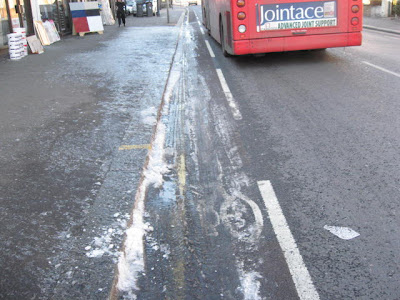 (Below) The A503, just after the Bell junction, heading west towards Tottenham. Water leaking from a Thames Water hatch has resulted in both white ice and black ice, stretching the whole length of the cycle lane between the junctions with Hoe Street and Hawthorne Road E17. It might look like water and wetness but it is ice. What's more I blogged about the leak and the ice at this very spot last February 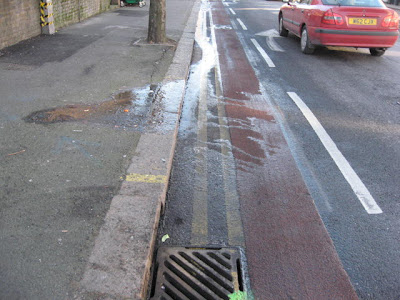 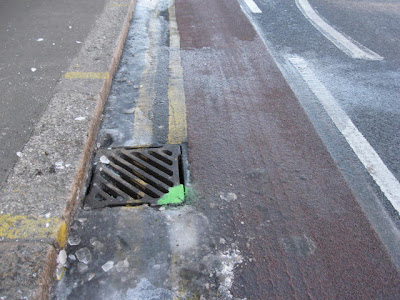 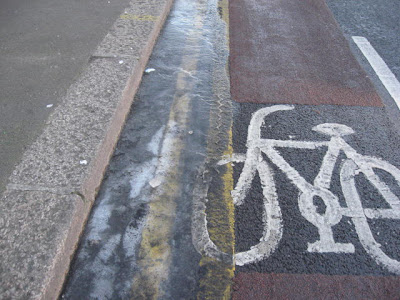 A SECTION of a major cycle lane has been left without grit in spite of a leaking water pipe and freezing temperatures. The section is formed of a slope running underneath the Billet roundabout, Chingford Road and is intended to provide cyclists with a safe way to leave Chingford Road. However, because of the water leak, believed to be within the wall of the structure, or from Cecil Road above it, it has been covered with dangerous sheet ice.

Local resident Keith Foster said: “The council has had 14 winters to get into the habit of gritting this location since it opened in 1994, and they still treat cyclists and cycle lanes with utter contempt.”

Mr Foster appears not to realise that this underpass is probably the best single cycling facility in Waltham Forest!

Whether you are cycling or walking, there is nothing new about dangerous ice on major routes in this borough.
Posted by freewheeler at 09:59