Has anybody here seen Clarence? 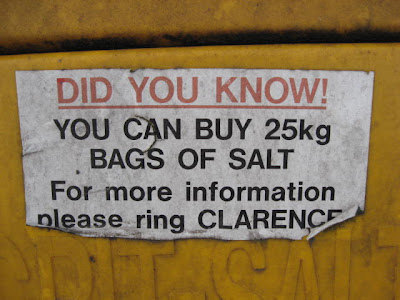 I suppose I lead an impoverished and unfulfilled life, because never once have I thought: what I'd really, really like is a twenty-five kilogram bag of salt. And I don't know anyone who has ever owned such a bag. But the Council knows that there are people out there desperate for this variety of white stuff, which is why it has generously placed yellow grit boxes across the borough, bearing this powerfully compelling message.

Only problem is, Clarence doesn't live here anymore. I used to ring Clarence up all the time. It was a freephone line and there was always someone to talk to. A bit like the Samaritans, I suppose. But then the council sacked Clarence. Clarence was a sad but necessary budget cut. So nowadays, instead of regular conversations with Clarence, I blog.

I suppose you could say that Clarence went the same way as the council's much-publicised anti-clutter campaign - that campaign, much trumpeted in wfm, to liberate the pavements of unnecessary obstructions. Crap like yellow grit boxes for example. 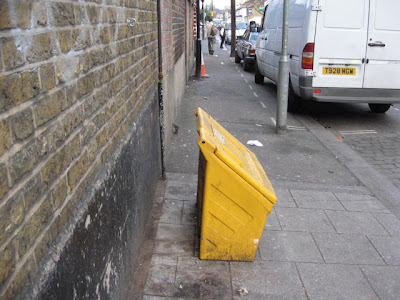