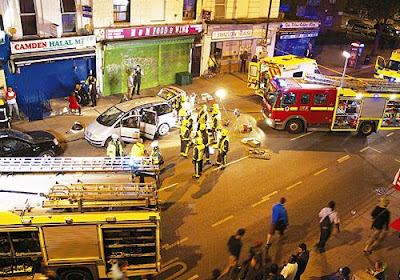 EMERGENCY teams this morning (Thursday) were back at the road where a cyclist was killed two weeks ago, this time rescuing people from a car caught in a collision.

Our front page picture shows how firefighters, police and paramedics rushed to the scene in Camden Road, Camden Town. The street was lit up by floodlights to help rescue squads. A police spokesman said: “There does not look like there are any serious injuries at this stage.” Campaigners have called for more safety measures to be introduced on Camden Road, nicknamed locally “Death Mile” because of the number of times it is closed.

Cantelowes councillor Phil Jones said: “I’m very concerned to hear of another car crash in Camden Road. TfL needs to implement its plans to increase safety without more delay.” Cyclist Paula Jurek died when she was crushed under a lorry on April 6, just yards from last night’s collision. Residents said there was also a crash in the road three days after she was killed.

Meanwhile a mother whose daughter was crushed to death by a lorry in central London 18 years ago says she is appalled “how little has been done” since then.
Posted by freewheeler at 10:02