The troubling death of Dorothy Elder 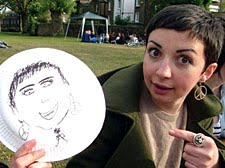 Dorothy Elder was a young cyclist and fashion student who was turning right out of Vernon Place, London WC1, into Southampton Row at 11 pm one night in November 2009 when she was hit by the driver of a 98 bus who was also turning right. The collision was recorded on the bus CCTV (I assume from a camera recording everything happening in front of the bus) and the Crown Prosecution Service decided there was a case to answer. The bus driver was charged with causing death by dangerous driving. This was subsequently reduced to a charge of causing death by careless driving (as far as I can tell this watering-down of the charge occurred during the course of the trial last week, presumably as a result of legal submissions made when the jury was not present). The jury took less than 40 minutes to find the driver innocent.

Why did the prosecution fail? Only members of the jury know the answer to that.

As far as I can tell from news reports of the case, Dorothy was ahead of the bus and was hit from behind. Both cyclist and bus driver were turning right. The junction here is wide enough to accommodate both a right-turning cyclist and a bus. Unfortunately the trial reports do not make it clear where the collision occurred. Was it at the actual junction, or had Dorothy already turned right into Southampton Row when she was hit?

Both the defence and prosecution foregrounded the issue of conspicuity:

defence expert Barry Wheeler said Burte’s view of the cyclist ‘may have been obscured’ by a combination of the windscreen wipers and fittings, and the driver’s cab.

He added there may have been a three-second window for her to spot Ms Elder become a hazard, but the driver would have been focusing on the more immediate traffic dangers to her right.

He said: “Clearly it’s hard to pick up things when it’s dark, at night, particularly when a person’s wearing dark clothing.”

Hamish Reid, prosecuting, said: “Speed does not appear to have played a part. It may be suggested that Miss Elder should have worn more visible clothing and should not have ridden in front of Miss Burte in the first place.

“However, the prosecution suggests that she was there to be seen and that Miss Burte fell below the standard of a competent driver by not seeing her and failing to take appropriate action.”

The argument that a cyclist who is wearing dark clothing is inherently negligent is an offensive one (in any case she was wearing a white woolly hat, which should have been highly visible). This collision took place in a well-lit central London street. The bus had headlights. Dorothy’s bike was apparently displaying lights, as legally required. Her ‘dark clothing’ is a complete red herring but it seems to have been uncritically accepted even by the crown prosecutor, who also adopted less than neutral language when he described to the jury how

Let’s consider the testimony of ‘defence expert Barry Wheeler’. This is the first time I have encountered the ‘blind spot’ argument in relation to a bus driver’s cab. The idea that windscreen wipers might have obscured the presence of a cyclist sounds to me desperately thin.

Nor is it all clear to me what Mr Wheeler meant when he told the jury that ‘the driver would have been focusing on the more immediate traffic dangers to her right’. The northbound traffic on Southampton Row would have been held at a red light, so I find it hard to understand what were the potential ‘traffic dangers’ from this quarter for a right-turning motor vehicle.

When I first read about ‘expert Barry Wheeler’ I assumed he was a retired traffic cop with years of experience of road crashes. Not so. This, I think, is our Barry Wheeler. His advertised website ‘wheelerauto’ is currently blank. I am not competent to comment on what ‘checked by the Law Society in 2003 and 2004’ and ‘Legal references: (none at present)’ signify. Mr Wheeler is presumably also the ‘Independent car expert’ who assists the BBC. This is his full CV.

If the collision was captured on CCTV, as apparently it was, it is far from clear to me why there should be any room for doubt as to how long the cyclist was visible in front of the bus. This would be a matter of record, not speculation.

There are so many questions which this case raises which unfortunately are not answered by rather bald newspaper trial reports. Presumably no one from the London Cycling Campaign attended the trial, to write it up afterwards.

Remarkably, what no one seems to have noticed is that this is the same junction where a fatal collision occurred involving a woman cyclist and a large, turning vehicle JUST ONE YEAR EARLIER. In the 2008 collision the cyclist was turning not right but was either turning left or going straight ahead.

You can get some idea of this fatal junction from this news report (which erroneously identifies the victim as male):


This brings us to the heart of the matter. The fundamental problem at locations like this is not ultimately one of the behaviour of cyclists or drivers but rather one of infrastructure.  Cyclists are supposed to mix it with buses, lorries, taxis, van drivers etcetera. Cyclists get nothing on Vernon Place apart from an Advanced Stop Line, which is not enforced and widely flouted. The entire infrastructure is built around motor vehicle flow.

This is the scene much further down the road – Woburn Place southbound at the junction with Tavistock Place. Cyclists get nothing from this five-lane highway. One section of the middle lane is allocated to parked taxis. Notice how close this cyclist is to the kerb – a symptom, I think, of fear. 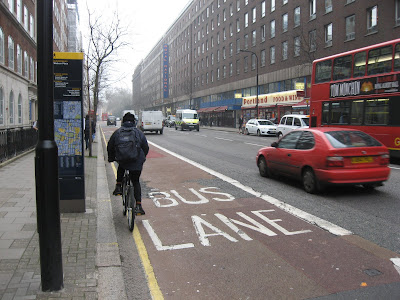 It doesn’t have to be like this. Streets like these have ample space for segregated cycle paths, with cyclists-only signals at all major junctions. That's the real solution - not mirrors at junctions, or SMIDSY campaigns, or all the other inconsequential measures which Britain's cycle campaign organisations embrace, and which serve only to prop up the 'Network Assurance' motorized status quo. 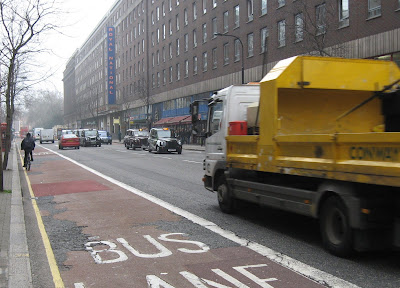 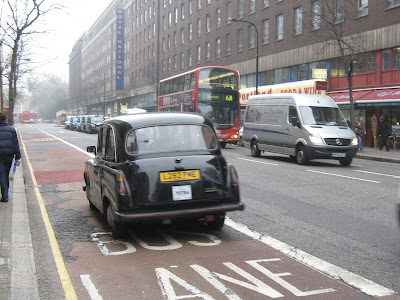 Posted by freewheeler at 14:17