Segregation: the cycling message is spreading 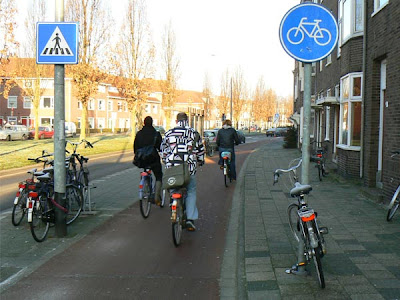 (Above) Segregated cycle path in the Netherlands.

(Below) The ‘right to ride’ in traffic, New Oxford Street, central London 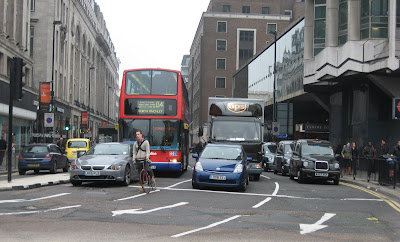 Back in Australia, it was clear that we had a problem with width and protection. We had cycle lanes but they were skinny, unprotected, on-road cycle lanes, on busy highways, often less than one metre wide. ‘Normal’ people — women, children, seniors, families, tourists — weren’t riding bikes and so in an attempt to ‘get more people cycling more of the time’, we were building more skinny, unprotected, on-road cycle lanes and not surprisingly the vicious cycle of people not riding was continuing.

In 2010 I launched my Cycling Super Highways concept; a vision for seven metre wide cycleways that are completely separated from cars, well-lit and — importantly — designed for everyone.

“Why so wide?” people asked. Cycling Super Highways are seven metres wide (3.6 metres of ‘usable cycling space’ in either direction) to allow two cyclists to cycle side by side — because it’s a sociable mode of travel — whilst providing enough space for a faster moving cyclist to overtake a slower moving cyclist.

They are wide and segregated so that ‘average, normal, everyday people’; women, children, seniors, will be encouraged to cycle not because they are cyclists but because riding a bicycle is a safest, convenient and enjoyable mode of travel. Finally they are wide so that they are safe enough for everyone to use regardless of their age, physical ability and cycling skills, for example young children with stabilisers cycling to school to use and mothers on cargo bikes cycling with their weekly shopping.
Posted by freewheeler at 11:17