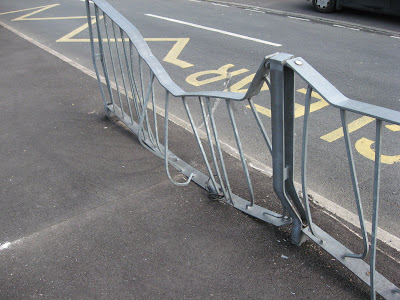 Someone has recently ‘lost control’ and crashed into the railings by the entrance to St Mary’s primary school in Walthamstow. No mention of any crash in the local paper, so it may well have been a non-injury collision, in which case it won’t be recorded in the casualty figures used to determine spurious notions of 'road safety'. Everywhere I go I see evidence of street furniture which has been hit by motor vehicles.

Yesterday I saw my third crash aftermath this year – an ambulance, a paramedic car and a police car attending what looked like a crash involving a motorcyclist, on Lea Bridge Road by the junction with Wood Street, 5.30 pm. The previous two were a motorcyclist brought down on High Road Leyton and a cyclist knocked down on Hoe Street. The local paper recently reported another powered two-wheeler knocked down on Fulbourne Road. 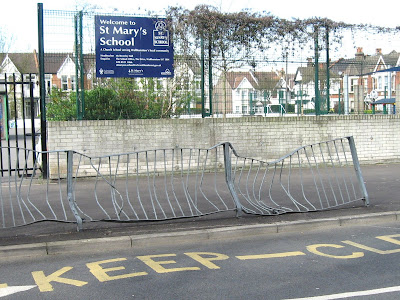 Posted by freewheeler at 12:32