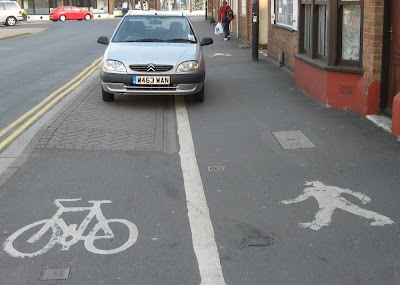 In 1997, CTC, together with the Department for Transport (DfT), published Cycle-Friendly Infrastructure. This document first proposed a 'Hierarchy of Solutions'

How the Solutions work out in practice. Planners should generally ignore Traffic reduction, speed reduction and all the other stuff. Instead go immediately to

which can be accomplished by painting some markings on the footway. This is a relatively cheap option and ensures that the car-centric status quo can be maintained by providing crap cycling infrastructure at the expense of pedestrians.

Under no circumstances must the kind of infrastructure with a proven record of success be mentioned by anyone at the CTC, except when explaining why this wouldn’t work in Britain.

If faced with dissent from pesky bloggers, remember to refer respectfully to The Thoughts of Chairman Franklin.

And don’t forget that most important argument of all, here articulated by Alison Dines, the top London Cycling Campaign activist in the London Borough of Islington:

“People who don’t cycle say they would like to see segregated bike lanes like they do in some European cities. Unfortunately, it is never going to happen in London because we don’t have the space.”

(Below) The heart of Islington (outside The Angel tube station), where as you can see it would be totally impossible to re-arrange this narrow six-lane street in order to accommodate cyclists. 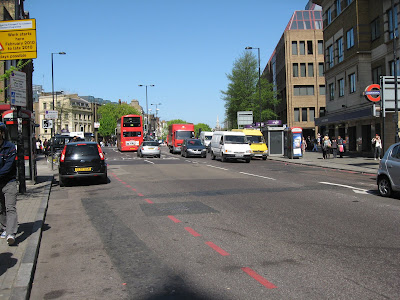 Posted by freewheeler at 09:11