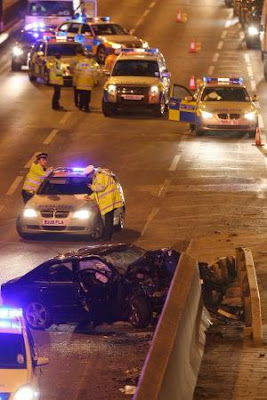 Mr Sherwani was lucky not to be hit by the engine of his Lexus IS200, which ended up just inches away from him on the front passenger seat.

But he said the car was so well built it protected him from other potential injuries, and he credits the brand as being one of the safest available.


And that’s the problem. Many modern cars are built with engines as powerful as were once used in racing cars, but they also offer massive protection to those inside them, encouraging dangerous risk-taking that threatens others with little fear of adverse consequences for the driver. The motor lobby cynically builds cars to travel at twice the maximum national speed limit but has always successfully resisted having to install a simple data recorder which would establish vehicle speed at the time of as collision. Mr Sherwani thinks he was driving at about 55 mph when he crashed. Presumably PC Plod hasn’t been smart enough to notice that the speed limit on this section of the North Circular is 50 mph. In any case, a driver whose excuse is that he fainted at the wheel should surely never again be allowed to drive.
Posted by freewheeler at 10:01