A scene from the best of both worlds 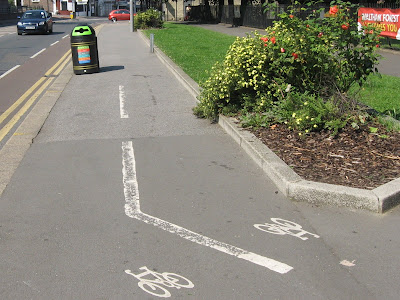 there are two distinct categories of cyclist; those that are happy cycling on the road, and who would continue to cycle on the road once ‘provision’ has been put in, and another category of cyclist, made up of those who are more nervous, or who don’t currently cycle but who would like to, for whom the infrastructure is being provided. Further, and problematically, this categorisation extends to the notion that these two distinct types of cyclist will require two different approaches to their cycling needs.

It’s no surprise that Waltham Forest is the first London borough to sign up to ‘Going Dutch’ as local cyclists have long been able to enjoy this visionary “twin track” approach to cycling infrastructure.

Here on the eastbound A503 outside Walthamstow Magistrates Court cyclists have the option of a pink on-road cycle lane suitable for sharing with speeding tipper truck drivers talking on handheld mobile phones or, alternatively, an off-road two-way cycle track built to the very highest British design standards for off-road cycling infrastructure. Here you can literally "go West" against the traffic - and there's more fun and excitement where the westbound track comes to a sudden end at the junction of the A503 and Farnan Avenue!

This "twin track" approach has proved brilliantly effective as it has now attracted a surprise visitor to the cycle track – a ‘new model’ Dalek. The Dalek is believed to have been drawn to this location by the council’s adjacent advertising, which invites extra-terrestials to sample one of the most advanced cycling cultures in the universe. 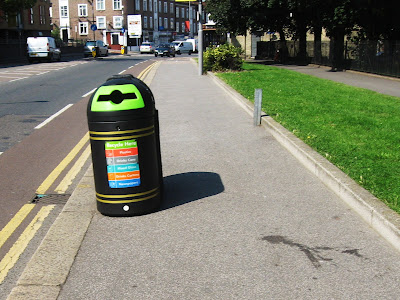 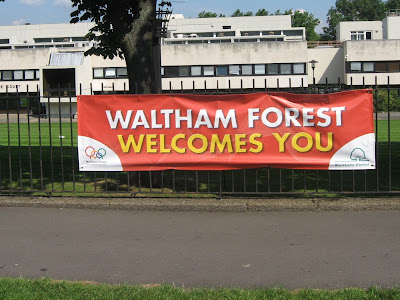 PLEASE NOTE: For Health and Safety reasons cycling is not recommended in Waltham Forest cycle lanes, cycle paths, or cycle tracks.
Posted by Freewheeler at 10:09