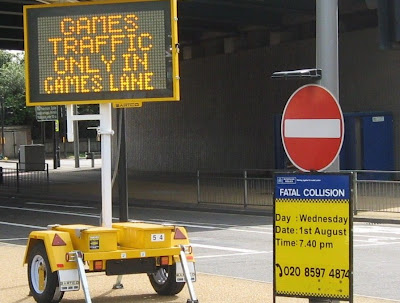 The vigil for the death of Dan Harris will begin with a ride from the National Theatre (where Critical Mass gathers, though this is not a Critical Mass event) setting off at 6:30pm. The vigil itself will be quiet and dignified gathering at the crash site, at the Lea Interchange on the north perimeter of the Olympic Park, from 7:30 to 8:30pm

"It's emerged that there used to be an advanced stop line (cycling box) at the junction where Dan Harris died, that was painted out when the Olympic lanes were added."

Quote: Originally Posted by charlie_lcc "This is horrendous, we are devastated for this guys family and friends. We have been complaining to the Olympic Authorities about this junction for 6 years."

Eight years, Charlie, not that it matters. I just dug up the first submission we made around the time of the candidate file. This area is where the city fails; where a motorway (the M11 link road, now known as the A12), has been bombed into a densely-populated place at the cost of many houses, generating unsustainable levels of through motor traffic for no gain, and now used by the unsustainable Olympics to ferry coachload after coachload directly onto the motorway, which is what cost Dan his life.

None of this was necessary; there was neither any need whatsoever to concrete over our beautiful East Marsh for a coach park, nor any need for the excessive motor traffic access. It's just the way certain people 'do' the Olympics and from which they don't want to divert. Dan has become the first and hopefully the last victim of this short-sighted planning.

The Olympics in London could have marked a sea-change in the way this event is run, but virtually all opportunities to make its transport better were missed. Now the only way in which this is managed appears to be by leaving lots of empty seats. Dan's seat will remain empty for a lot longer than these few weeks. Rest in peace, Dan.
Posted by Freewheeler at 09:08