Olympic sprint and hurdles events for everyone

As the Olympics draw to a close please remember that Olympic sprint and hurdles events are occurring all over London and participation remains open to all. If you fancy your skills at jumping, then just go for a stroll and try out one of these. 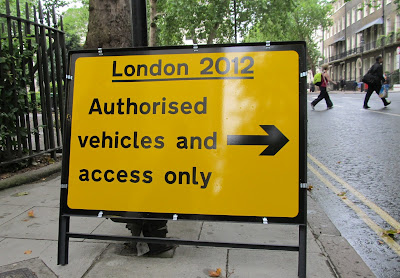 Once you have mastered the art of jumping over an obstacle, the next thing is to attempt sprinting. Central London contains numerous combined hurdling and sprint tracks which are free for the public to use.

Have fun finding out if you can get to the other side of the road without being run down by an Olympic BMW in the Games Lane. 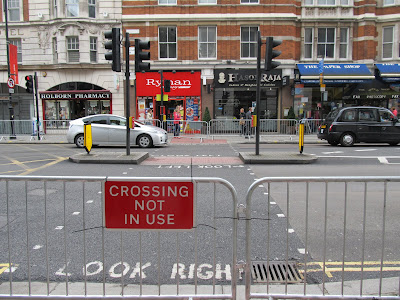 For added fun, bring along a suitcase. Here we see two visitors to London who are attempting the gruelling Parliament Square “crossing the road” track (CAUTION: suitable only for athletes in the peak of condition). They have successfully made it to a traffic island, but already their chances of a gold are fading rapidly as, hopelessly confused, they look in completely the wrong direction! 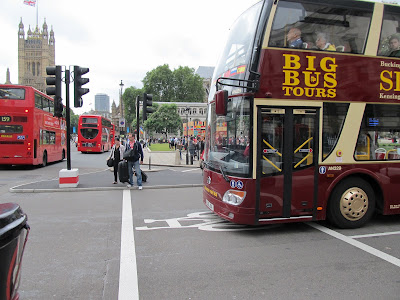 Here they have corrected their error. But what they haven’t spotted is that there is a surprise hurdle directly ahead of them just as they think they’ve finally managed to cross the road! 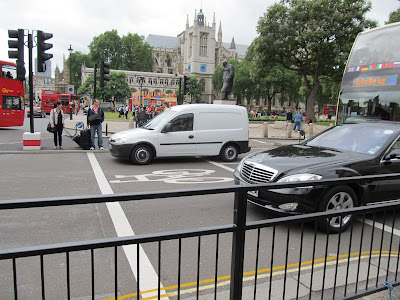 These foreign visitors (below) make the same discovery. Watch as they run shrieking from multiple lanes of approaching motor vehicles, in the final round of the gruelling and highly dangerous “safety in numbers” event. 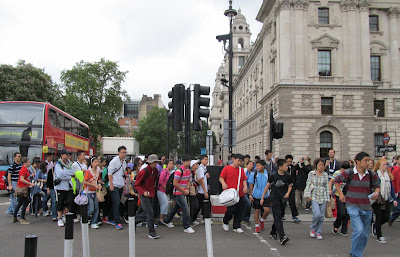 From the Bow Roundabout comes this particularly impressive piece of film of a gold medal winner:

note that not only are there no pedestrian lights, but on this crossing there isn't even a dropped kerb, so she has to lift up the buggy whilst sprinting across 3 lanes of traffic with no signalling and a small child in tow.

Finally, let’s give credit where credit is due and thank Ben Plowden for making all this possible.

As he modestly puts it, Prior to working at TfL, Ben was one of the country’s leading environmental campaigners.

Ben was ahead of his time, arguing as long as 2000 that To see why walking and cycling are central to solving Britain's transport crisis, we should look to the Netherlands.

Yes, until he wheedled his way into TfL our Ben would gush about iconic cities which set an example:

Safe and direct pedestrian crossings at every junction make walking quick and easy for people in a hurry. For those with time to spare, benches, street cafes and pocket parks provide places for reflection and relaxation. The traffic is slow and light. The pavements are wide and clean. There is not a guard railing to be seen. No wonder the smart money is pouring into Portland.

Interesting that Ben was interested in smart money, as his annual salary at TfL is reported to be £170,000.

Ben Plowden is TfL's "Director of Better Routes and Places". His previous title at TfL was "Director of Integrated Programme Delivery", which job involved "bringing together key projects including walking and cycling, road safety and smarter travel".

People in public life often make political transitions, for example, MPs who "cross the floor" of the House of Commons. But few can have made such a discreditable transition as Ben Plowden. For he was the first Director of the Pedestrians Association (now Living Streets), heading that organisation from 1997 to 2002. In 2001 he said "We are trying to make streets places people can enjoy." Presumably by "people" he did not mean "motorists who want to drive at speed". Carlton Reid has highlighted some of the other things Plowden said when he was in that job.

It’s no surprise at all that Ben Plowden now devotes his time to spin and blather.
Posted by Freewheeler at 13:23