Are you safer on a Boris bike?

It is asserted that

bike hire cyclists are three times less likely to be injured per trip than other cyclists in London as a whole.

If true, this is an interesting statistic.

What conclusions can be drawn from this statistic?

they are more likely to be tourists (and have a carefree attitude), not wear helmets, and I would suggest that they are less likely to be aware of the road environment in central London.

The point is that, yet again, we have evidence of adaptive behaviour by road users, in this case motorists. It backs up the evidence for Safety in Numbers (SiN)

Does it really, though?

My immediate response to the assertion that bike hire cyclists are three times less likely to be injured per trip than other cyclists in London as a whole is that this may be because trips made using hire bikes are short ones, while other cycling journeys are longer.

If other cycling journeys are on average three times longer than those made by hire bike then the statistical difference in casualties becomes of no significance whatever.

Or to put it another way, it’s about exposure to risk. Measuring safety by individual trips is not a good way of measuring danger because some trips are far more dangerous than others. Exposure to risk involves the length of the journey, the kind of roads cycled on, and the prevailing conditions on those roads in terms of motor vehicle type, volume and speed. (It may be, for example, that Boris bikers cycle far less in the vicinity of lorries than commuter cyclists on certain routes.)

I am not particularly convinced by the argument that drivers treat Boris bikers better than other cyclists, or that the behaviour of Boris bikers is significantly different to that of other cyclists. But then I think that the behaviourist approach to cycling and “road safety” is doomed. Trying to modify the behaviour of drivers and cyclists on shared roads is the classically failed tradition of UK cycle campaigning. Danger reduction is best accomplished through re-designing road infrastructure to separate cyclists from vehicles on the Dutch model, not by attempting to shape the individual psychology of the driver or the cyclist.

My own personal observations also suggest another reason why Boris bikers may be less likely to be hit by a motor vehicle than other cyclists. See if you can spot what it might be. 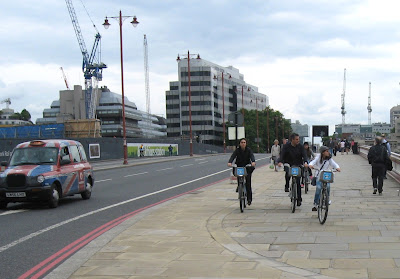 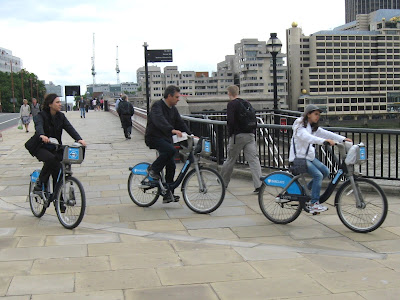 Posted by Freewheeler at 09:00