This is not dangerous 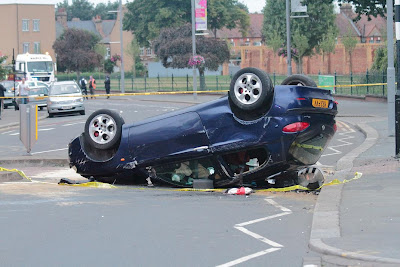 
It appears that no one was injured in this SVO crash (Single Vehicle Only) and so this will not appear in the government’s annual road casualty statistics, which are commonly regarded as an index of road danger. Air bags and rigid steel safety frames often protect drivers and their passengers from the consequences of a crash like this.

The blue Alfa Romeo smashed into a lamppost and turned over outside the William Morris Gallery museum in Forest Road, Walthamstow, just before 6pm on Friday (August 24).

Police say the vehicle was being followed after it failed to respond to a request to stop a short distance earlier. Ryheem Gordon, 18, of College Close in Hackney, has been charged with dangerous driving, failing to stop, not having proper insurance and not having a valid driving licence.

Although it isn’t immediately obvious from the photograph, the upside down car is lying on a zebra crossing.

You might say that In reality, it was only sheer chance that prevented a pedestrian from being seriously injured, or even killed, in this incident..

The site of this crash has featured previously on this blog here and here.

In the distance, beyond the zebra crossing in the foreground, you can see the bend where this driver lost control in the second photo here.
Posted by Freewheeler at 09:57