Grayson Perry and cycling in Walthamstow 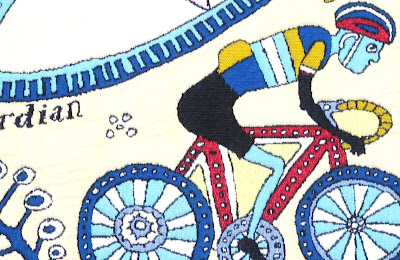 A detail from The Walthamstow Tapestry

Clyde Loakes, cabinet member for the environment, said: “We have not done enough to promote cycling over the last few years and we need to give ourselves a huge kick up the backside.

“If we can’t get more people cycling in Waltham Forest when we know our roads are going to be congested during the summer, and when our cyclists are winning gold medals, then when can we?

So how did that last bit work out?

This (below) is the single most expensive piece of dedicated cycling infrastructure in the borough installed as a result of the Olympics, namely the Ruckholt Road bridge. (If the words “Ruckholt Road” seem familiar it’s because you recently encountered them here - although in fact the fatal collision took place not on Ruckholt Road but a little further south, where the A106 Eastway traverses a major multiple-lane junction in the shape of a zig-zag beneath the A12 East Cross Route.)

Needless to say like much off-road cycling infrastructure in the UK this bridge is “shared use” and also for use by pedestrians. It’s not particularly obvious that cyclists are permitted to use it and no doubt in the years to come some cyclists using it will get shouted at by pedestrians.

And now take a look at the hundreds of pedestrians and cyclists pouring over this bridge on one of the busiest days of the Olympics: 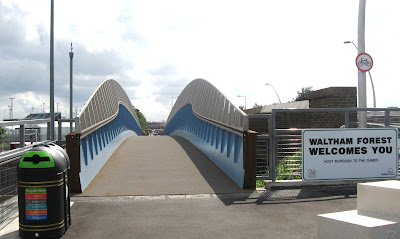 But it wasn’t that I just happened to come along at a quiet moment. The “Green” Olympics have been a massive fraud. The huge numbers of people cycling to the Olympic site via the Eton Manor entrance in Waltham Forest simply haven’t materialised.

One reason why few people would wish to cycle over this Olympic bridge is that to get to it you first have to ride on roads like this (below). This is Leyton High Road outside the tube station. Here, a classic crap cycle lane fizzles out and you find yourself on a rapidly narrowing carriageway on a collision course with overtaking motor vehicles. 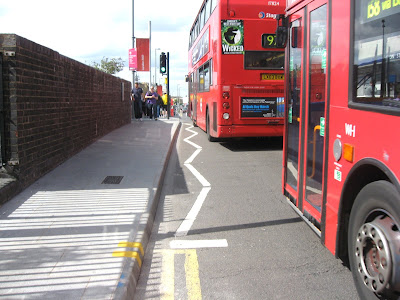 Not that people are exactly rushing to walk to the Olympics either. In another vivid example of the gulf which lies between glossy council propaganda and the reality on the streets take a look at this. The council rented space to traders for a temporary market designed to service all those thousands of Olympic visitors on foot:

Between 9am and 10pm customers will be able to purchase everything from Caribbean, Indian or Thai food, to cheeseburgers, German sausages and jacket potatoes. Visitors can also sample cool refreshing lemonade made from an authentic lemonade making stand or try naturally healthy fruit or vegetable smoothies.

Marshall Road is a street in the heart of Leyton.

No it isn’t. Marshall Road is a bleak slip road which leads to the Temple Mills retail park, which has a huge car park. I’ve never once met a cyclist on the cycle track on Marshall Road, because it’s a dead-end route that goes nowhere other than to a car park and some superstores. But it seems pedestrians are also in short supply, even though Marshall Road leads to the new bridge and the Eton Manor Gate into the Olympic Park. This was the scene last Saturday: 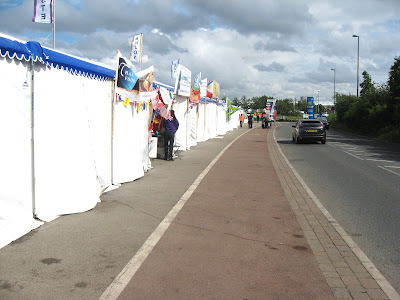 Almost all the traders had closed their stalls and given up.

Amit Gokani, of Croydon, is one of dozens of furious traders who signed up to rent stalls at a temporary Olympic and Paralympic Games market in Marshall Road, where pitches cost £13,500 for 45 days.

He said: "I'm fuming. We've been completely sold up the river. "I was sold this on the pledge that there would be around 33,000 people on Monday and the same on Tuesday. Instead I've seen about 150 people since Friday. I've spent £10,000 on food and equipment alone but in the last four days I've made £28.

Which brings me to the William Morris Gallery.

The William Morris Gallery has just re-opened after major refurbishment.

Can you work out which mode of transport is excluded from the Gallery’s advice on how to get to it?

Send your answer to the eminent local councillor quoted above who said: “We have not done enough to promote cycling over the last few years and we need to give ourselves a huge kick up the backside.

The Gallery is very well worth visiting (and although no one thinks to mention it, yes it does have new cycle stands). The refurbishment and re-design is stunning. William Morris was a multi-talented individual, and the Gallery covers all aspects of his career as a designer, craftsman, manufacturer, writer and activist. I had a dark suspicion that Waltham Forest’s New Labour council would sanitise Morris’s radical politics but my anxiety proved unjustified. There’s a room devoted to Morris the campaigner, with apt red lighting, and a generous display of his commitments (take a trip into our English heritage with Morris’s sparkling assault on TORY TERRORISM IN 1887). And after absorbing Morris’s trenchant views of the toxic Tories and the thuggish and brutal Metropolitan Police, why not relax with a glass of wine and a bite to eat in the impressive new café?

Admission is free. And if you visit before September 23 you’ll have a chance to see Grayson Perry’s Walthamstow Tapestry.

Although I was previously aware of Grayson Perry’s existence there was nothing he’d done that loomed large enough to engage my interest. All this has changed. The Walthamstow Tapestry is dazzling. It’s massive, imaginative, original, witty and, well, awesome. Go see it while you can, because it will shortly disappear into a private collection and might not reappear for years. The tapestry is crammed with detail. And the representation of cars is spot on, with their slob drivers, gross passengers, and two collisions. 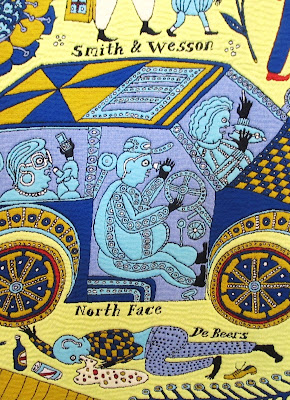 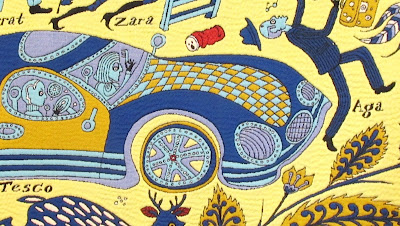 These brilliantly accurate portraits of local drivers help to explain why, with the crowds pouring in on the first weekend of the newly opened Gallery, the bike stands were a little under-used. 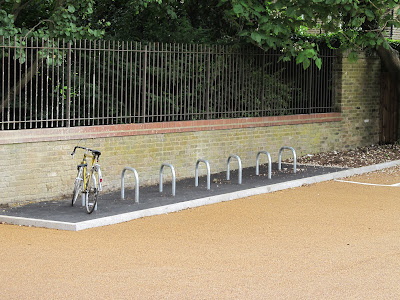 Useful tip to visitors: If cycling to the Gallery on the borough’s prize-winning cycle lanes please ensure you have first made your will. Local roads contain large numbers of TfL-approved minicab drivers. 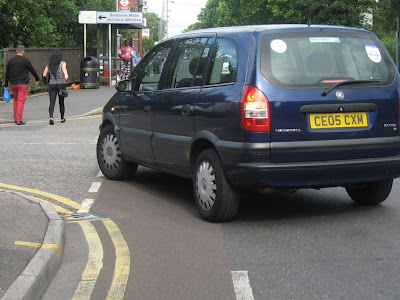 Posted by Freewheeler at 12:58