Luckily the London Borough of Richmond has come up with some exciting ideas, which include:

[the current flavour of the month among London’s deranged transport planners, who are doing their bit to suppress even the current low levels of cycling by making things even more off-putting for vehicular cycling by forcing cyclists even closer to overtaking motor vehicles]

Sadly there are a few malcontents who are not persuaded by these improvements:

surely any plan to get rid of bus/cycle lanes could easily see the introduction of dedicated bike lanes and still have scope to increase pavement width?

And those ingrates in the local cycle campaign have even dared to suggest that Richmond's transport planners don't understand cycling:

The council is convinced this is an improvement, completely misunderstanding why people do not choose to cycle in the borough.

But I expect Richmond is like the London Borough of Waltham Forest. The roads are just too narrow for cycle tracks on the Dutch model. In Waltham Forest our transport planners are making every effort to improve cycling safety by discouraging cycling altogether.

Here on Wood Street in Walthamstow (aka the B160), a direct through route for cyclists has seen expensive “street scene improvements” which involve widening the footway and replacing the cycle lane with parking bays. Cyclists are pushed closer to overtaking motor vehicles and some lovely new bike logos have been painted on the carriageway. This model appears to be being pushed out across Greater London, but as usual pioneering Waltham Forest was there first. 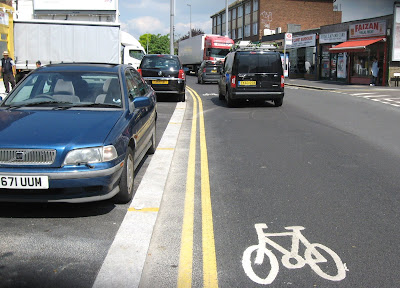 Isn't this a lovely street for going shopping? If trade is suffering I expect it's because there isn't enough car parking.
Posted by Freewheeler at 09:20