This is not a headline you are likely to read in any British newspaper today.

And yesterday, while cyclist Laura Trott was winning another gold medal, her sponsor BMW’s prime commodity was at the same time killing two small children waiting to cross the road.

If you look at the Google photo of the crash site (below), you see a classic piece of British transport planning, a junction designed entirely around prioritising the speed and convenience of drivers, at the expense of safe cycling and safe, direct, convenient walking. Incredibly, comments boxes on blogs and in newspapers continue to fill up with cyclists asserting that British streets are just “too narrow” for cycle tracks compared with the Netherlands. 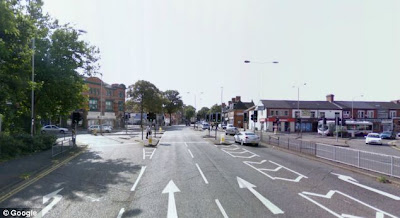 The CCTV footage of the crash also shows in the foreground a white van parked on the footway on double yellow lines by a bend, in itself a symptom of the comprehensive accommodation by British policing and local authorities of everyday lawless, dangerous and anti-social behaviour by drivers. 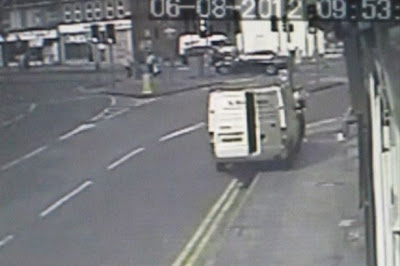 This killing of two small children occurred in Leicester, where with perfect timing and as a perfect example of the British tradition of soft measures comes this.

Gosh it’s a pity we can’t all learn to share the road and learn some mutual respect innit.

The BBC frequently ignores cycling fatalities but luckily has the resources to report on horrifying incidents involving BMW drivers like this.

The nice thing about being a BMW driver is that you can drive like a madman, crash at an incredibly high speed, and still not kill yourself.

If you had any doubts about the safety of the BMW M5, you can rest assured as this horrific accident attests to the benefits of German engineering.

According to M5 Post, a 60-year old driver was travelling at approximately 300 km/h (186 mph) when he lost control while swerving to avoid another motorist.

BMW produces killing machines like this - every model is guaranteed to go at least 50 mph faster than the maximum permitted UK speed limit.

Olympic cyclists and other athletes who enjoy BMW sponsorship can be found listed here.

Posted by Freewheeler at 10:35