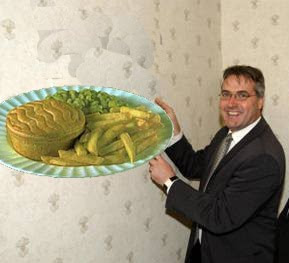 A CYCLING 'czar' has been appointed by Glasgow City Council to get more people on their bikes by 2020.

Councillor Frank McAveety has been given the job of making cycling the most popular activity in the city.

[Yes, cycling is destined to become even more popular in Glasgow than sex, drinking, fighting, or the consumption of fried Mars bars.]

The former sports minister said he was determined to see biking overtake walking, football, swimming and dancing as the city's favourite sport.

Now I must confess that I lead such a miserable and stunted existence that I had never previously heard of Frank McAveety.

But thanks to the interweb I now know a great deal.

Frankly, Frank doesn’t strike me as being someone who has ever been particularly interested in cycling.

Nor does his record as a tribune of the people inspire much confidence.

Yes, the job of Glasgow’s cycling Czar has gone to an overweight liar who also happens to be a sexist creep (or to put it another way, a political figure who puts a new gloss on the notion of ‘petitions’).

In the past Glasgow’s new cycling Czar has been very supportive of local Glasgow enterprise including a vehicle body shop repair company called Ferrymill Motors.

If Frank ever needs a career change I feel sure there's a place for him at Walthamstow Town Hall.

The picture of Frank and his plate of food is borrowed from here.
Posted by Freewheeler at 08:00