after the BMW crash, Hoe Street returns to ‘normal’ 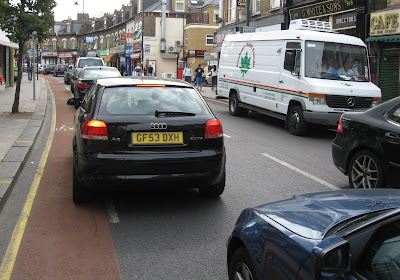 After yesterday’s crash this section of Hoe Street was re-opened in the afternoon, allowing cyclists once more to enjoy a stretch of the borough’s prize-winning 20 miles of cycle lanes. It could almost be a scene from Copenhagen, couldn’t it? Yes, there’s no mistake – 2010 is London’s Year of the Bicycle.

It has also now been revealed that

The 27-year-old motorist was driving down Hoe Street, Walthamstow, when he failed to stop for a police vehicle.

A short pursuit commenced up Hoe Street and ended when the BMW hit a lamppost.
Posted by freewheeler at 08:48