lorries and cyclists: what is to be done? 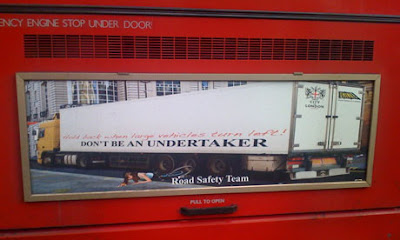 I was dodging five lanes of swerving vans and buses near King's Cross when I saw the ad on a double-decker yesterday.

One of those “five lanes of swerving vans and buses” should be re-allocated exclusively for cyclists, who are kept segregated from high volume motor traffic, on the successful Dutch model. All other solutions – education for lorry drivers and cyclists, cycle training, conspicuity and high viz gear, cycle helmets, ‘share the road’, ‘three feet please’ – are utterly bogus alternatives which only serve to perpetuate road violence and inequality.

Sadly those two major obstacles to mass cycling – the London Cycling Campaign and the Cyclists Touring Club – remain stubbornly wedded to the catastrophically failed strategy of ameliorating vehicular cycling. They do indeed resemble sects.
Posted by freewheeler at 15:20