Can Oona King help this Walthamstow driver? (war on the motorist update) 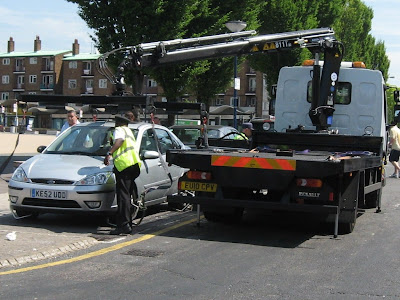 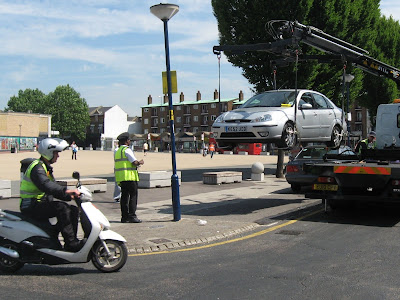 A car is removed for a parking offence in Walthamstow High Street: can Oona King help this driver and protect London from these terrible scenes?

London Labour Party members are currently voting on whether to select Oona King or Ken Livingstone as their candidate for London mayor at the next election. Ken Livingstone, as we know, is the car-hostile fanatic who brought in Britain’s first congestion charge and believes in all that nonsense about London having clean air. He was also planning to extend congestion charging into new parts of London as well as charging drivers of 4X4s more.

Oona, by contrast, is pitching herself as the friend of the plucky, oppressed motorist:

Some of London's local authorities have a nasty habit of using motorists as human cash machines.

It might not seem like the most urgent issue but it cuts to the core of why I want to be Mayor; it's an injustice that's been going on for too long.

What's more, it's disproportionate and contrary to the spirit of the law. It happened to me recently: I was stung for £260, and although I'm better off than many, I found this a stretch.

But Oona is not simply motivated by self-interest. It’s her sense of justice which has been ignited. Her heart is all compassion.

An elderly war veteran on a weekly income of £50 came to see me about his unemployed daughter's parking fine of £125. Her car was clamped when she ran upstairs to help him while he was having a heart attack. Despite a doctor's letter verifying the situation, the local authority refused to back down.

Cynics might feel that Oona King’s heart-breaking story has no credibility at all since every driver who gets a ticket is invited to appeal to the parking adjudication appeals service if they feel a parking ticket has been issued unfairly. This independent service allows a large number of appeals and if the heart-rending details of Oona’s anecdote were true the appeal would certainly have been allowed, unless, of course, there were other aspects to the story which we are not being told.

Oona’s vast heart is also touched by the plight of

the disabled person with their specially adapted vehicle. These people should have parking facilities.

Maybe she doesn’t actually spend much time on the streets of London. It’s like she’s never heard of the blue badge scheme (very popular with my local plumbers, builders and roofers incidentally) or disabled parking bays.

But now here’s a difficult philosophical teaser for Oona, one which would have stretched even the mind of Aristotle. She’s the friend of the poor, the infirm, the disabled and the savagely oppressed driver whose car is towed away. But the reason why the car is being removed from that parking bay in Walthamstow High Street in the photographs above is that the driver was parked in a disabled parking bay without a blue badge. So is Oona the friend of the disabled driver or the able-bodied driver whose car is removed? I think we should be told.

Hat tip to Cycalogical, who remarks

If all motorists could be trusted to park considerately, we wouldn't need any parking enforcement.

Incidentally, what offence was Oona was committing when her car was towed away? Parked on double-yellow lines in a cycle lane, perhaps? And what vehicle does she drive (just curious)? Such trifles are disappointingly omitted from her manifesto.
Posted by freewheeler at 08:53