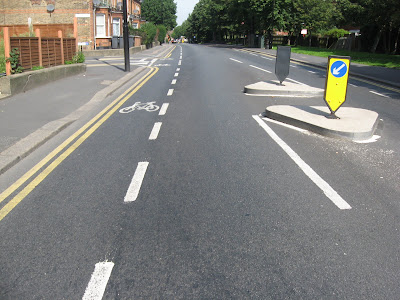 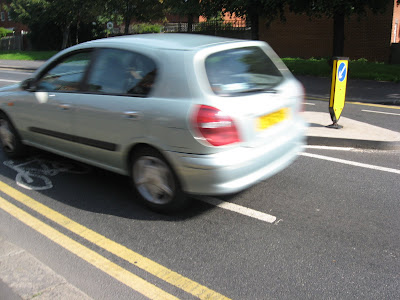 I’ve blogged before about the danger to cyclists posed by pinch points . My concerns are shared by other cyclists.

The problem is exacerbated when the local authority puts in a cycle lane beside the pinch point, because the road markings may simply put the cyclist and the driver on a collision course. This is what happens on Markhouse Road (A1006) in Walthamstow. My photograph shows the traffic island near the junction with Boundary Road E17. There are half a dozen similar islands further along this road and the problem affects cyclists travelling in either direction. 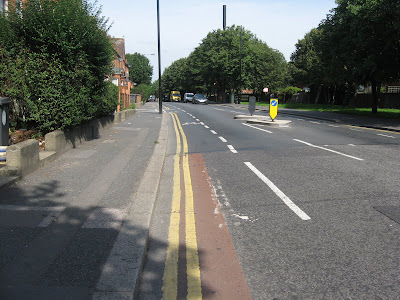 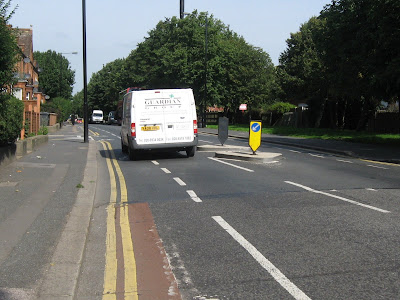 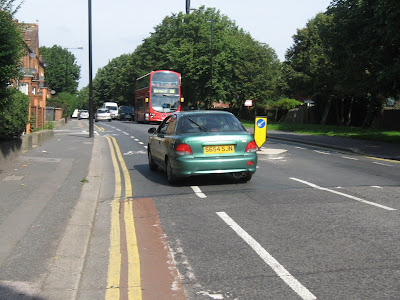 The correct approach to this traffic island for the cyclist is to pull out into the road and make it physically impossible for the driver to overtake you. However, cyclists without cycle training or defensive awareness are unlikely to be aware of this strategy and will happily keep to the cycle lane, only to have the terrifying experience of a driver speeding past an inch from their right handlebar.

Cyclists who ‘take the road’ are, however, likely to be perceived by some drivers as being deliberately obstructive and can expect the blowing of horns and advice about correct cycling procedure (such as ‘Stay in the cycle lane, you cunt!’).

For both the novice and the experienced cyclist the end result is exposure to motor terror and aggression and an unpleasant and stressful cycling experience. This kind of design only serves to suppress cycling, in a borough where modal share has long flatlined at one per cent.

Both the cycle lane and the traffic islands on Markhouse Road are an impediment to cycling. Much better to get rid of the cycle lane altogether and put in a zebra crossing for pedestrians. Even better (and the only thing which is going to raise modal share) segregate cyclists from motor vehicles on the successful Dutch model.

Sadly, vehicular cycling organisations perceive cycle lanes as an end in themselves and intrinsically A Good Thing:

The Council regards cycling as an important mode of transport and almost all main roads in the borough now have cycle lanes.

My CTC goody bag from the Redbridge Sky Ride contained a last year's copy of the CTC’s glossy magazine Cycle. On the letters page, Nick Coleman writes to complain of exactly the same problem which I have outlined in this post. As he points out, “drivers try to accelerate past the cyclist to get to the refuge first then suddenly cut in to get through the gap forcing one to swerve into the gutter or worse” or “one is in the gap and the vehicles behind actually have to slow down resulting in a blaring of horns, various verbal abuse and gestures or in one case something thrown at me”.

And the CTC response?

They are a problem. However, cycling assertively and ‘taking the lane’ (riding further out into the road, rather than in the gutter) can be a huge help.

A classic CTC response. The CTC hasn’t listened to a word of Nick Coleman’s complaint. As a committed vehicular cycling organisation its only message is that cyclists must adjust their behaviour both to dangerous infrastructure and dangerous drivers, and that all cyclists require is training, confidence and eye contact with drivers. The CTC has no interest in campaigning for safe segregated cycling infrastructure on the Dutch template, it has an arrogant disregard for the reasons why the majority of people won’t cycle and it has no interest in considering its own complicity in the continuing decline of cycling. It is in denial about the parlous state of cycling in Britain, preferring to pretend that all's well. It makes the absurd claim that London has seen a 91% increase in cycling since 2000.

That’s simply not true. That statistic originates with Transport for London, and when I asked TfL for its definition of ‘London’ it turned out to mean counts taken on just 29 streets in Greater London.

If there had really been a 91 per cent increase in cycling since 2000 then this would have been reflected in a surge in modal share. It hasn’t happened. In one London borough (Enfield) modal share for cycling is zero, and in another (Newham) it flickers between zero and one per cent. Cycling is in its death throes in some parts of London but you’d never know it from the smiley propaganda of the CTC and the LCC. And naturally no one is interested in measuring cycling on roads like Markhouse Road (A1006) in Walthamstow, because the results would probably be an embarrassment and no one in the transport or cycling establishment is interested in measuring the reality of cycling’s stagnation or decline.
Posted by freewheeler at 09:35