Transport for London: the enemy of cycling 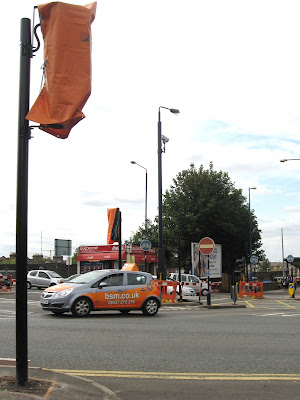 Promoting bicycle use without improving bicycle facilities is meaningless. The Dutch citizen knows what a bicycle is and how to use it. The promotion of bicycle use does not require billboards, but instead adequate, suitable facilities.

In London we do different. Promotion is top of the agenda and cycling is promoted as sexy and cool, even though London’s vehicular cycling infrastructure is mediocre in every aspect – poorly designed, dangerous, inconvenient, frequently obstructed and poorly maintained. It is for these reasons that cycling’s modal share in Greater London is stuck at 2 per cent and continues to flatline. The overwhelming majority of people in London do not want to cycle in traffic.

Transport for London has made it quite clear that as an organisation it is not prepared to re-allocate road space from the car driver to the cyclist. The only infrastructure which it is prepared to invest in is vehicular cycling infrastructure, even though this strategy has a proven record of failure. Ironically, while London’s failed cycling infrastructure is tampered with through cosmetic ‘improvements’ like ‘Cycle Superhighways’, the vehicular cycling environment continues to deteriorate as road space is re-allocated for… car parking – as has already happened here and will shortly happen here.

As David Arditti has observed:

It seems that TfL does not really, deep down, believe in the “Cycling Revolution” it proclaims. It seems this cycling revolution is desired only if it does not produce too many cyclists. It hasn’t been thought through.

The big thing that tends not to be understood in the UK about segregated cycle lanes, Dutch-style, is that their main purpose is not safety, per se, as cycling is inherently quite safe anyway, it is the prioritisation of space for cycle traffic. It is, in other words, to give the bike a competitive advantage in the struggle for space on the roads, which makes bike journeys quicker and more efficient, as well as more pleasant. There is no other effective method of preventing parking, loading, queuing, bus and taxi stopping in cycle space, and general obstruction by motor vehicles, other than physical segregation. This is why it is used so extensively on the continent.

But tampering with the vehicular cycling infrastructure and investing huge sums in cycling promotion is enough to bring the London Cycling Campaign on board:

Transport for London is commited [sic] to making London a safe and cycle friendly city.

Oh yeah? Even at the level of vehicular cycling, TfL is contemptuous of cyclists. My proof, dear reader, is the dedicated cycle crossing across the A112, leading from St Mary Road E17 to Selborne Road.

It provides a green signal for cyclists to cross a very busy junction on an important cycling through route. The signal was hooded exactly one year ago, in September 2009, for roadworks done on behalf of Transport for London (see photo above). Naturally no temporary lights were provided for cyclists because TfL despises cyclists and is wholly indifferent to their welfare.

The reason for leaving the cycling lights hooded is that TfL say they have identified a conflict between the lights for drivers and the lights for cyclists in the final part of the crossing. TfL promises to sort this out by March/April 2011. By this time cyclists will have been waiting for over 18 months to see their signalled crossing restored, but hey, what’s the hurry? After all, it’s only cyclists we are dealing with here.

(Below) On your marks, get set... Cycle as fast as you can to get across a total of six lanes of traffic without any help. Good for developing strong nerves. 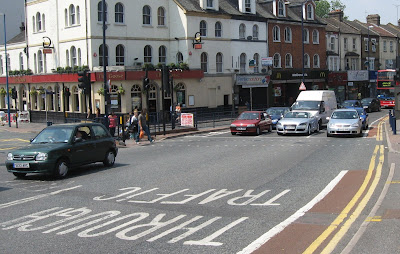 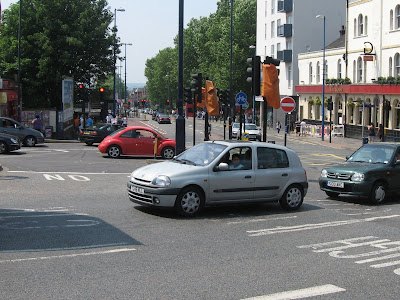 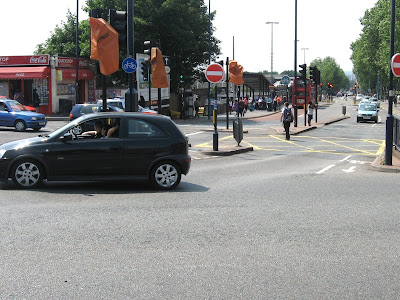 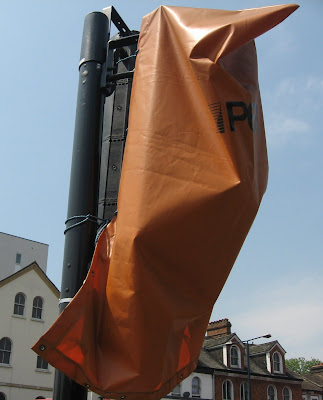 Posted by freewheeler at 11:08