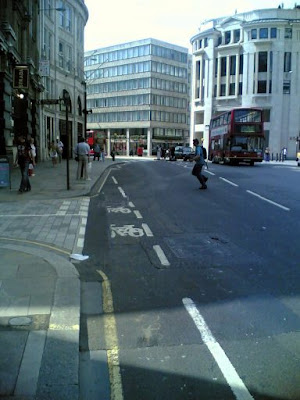 It’s the iconic London Cycle Network Plus, where the infrastructure is of the type which “provides continuous, fast, safe and comfortable conditions for cyclists” (in the words of Transport for London). Photo: Ralph Smyth, City Cyclists website (see below)

Underneath a feature on Boris Bikes by Adam Bienkov I came across this comment:

The London Mayor under spent his cycling budget by £54m last year and £10m the year before that. Whilst it is good to see the superhighways and cycle hire implemented, the big expansion in cycling needs to be in outer London.

The London Mayor and Transport for London have issued press releases announcing “record” levels of investment in cycling this year and in the previous two financial years. In 2008/09 ten million was added to the cycling budget by the current Mayor, but actual expenditure was the same as that allocated by the previous Mayor. In 2009/10 the budget was £111m, but actual expenditure was just over half of that at £57m.

London’s cycling revolution has been stalled for the last two years as the Mayor failed to finish the London Cycle Network, which would have created hundreds of linked up cycle routes throughout London. The Mayor has talked about record levels of expenditure on cycling, but his main achievement in the first two years was to cancel the one big project that was on the verge of delivering a huge advance for cycle safety, especially in outer London. Expenditure on cycling has gone up, but with the exception of some good work by a few local authorities, little extra was acheived in the first two years.

By Jenny Jones on Sep 6

Jenny Jones is a Green Party representative on the Greater London Assembly and a cogent critic of the Metropolitan Police’s indifference to road violence and lawlessness. While she is right to be sceptical of TfL’s spin regarding cycling investment, I think she is quite wrong to talk of a ‘cycling revolution’ which has ground to a halt because Boris cancelled further work on the London Cycle Network.

In the first place there hasn’t been a ‘cycling revolution’, unless you are gullible enough to swallow what comes out of TfL’s press office: stuff like the number of cyclists in London has risen by 40% during the past five years - a figure based on nothing more than cycle counts (whose methodology is obscure) taken on 29 cherry picked main roads with high levels of commuter cycling.

The cycling revolution hasn’t stalled because it never existed in the first place. Cycling’s modal share in London is risible, both at a borough level and in terms of Greater London. But the entire cycling establishment prefers to evade the only statistic that really matters, because no one in this establishment is interested in acknowledging either failure or their own role in it.

It seems to me foolish to blame Boris for the problems associated with the London Cycle Network. Back in 2005 the new super improved London Cycling Network Plus (LCN+) was already seven years behind schedule. You can’t blame Boris for that. All you can accuse him of is bringing down the curtain on the project. The LCN and LCN+ were intended to provide 3,900 km of good quality cycle routes in Greater London. 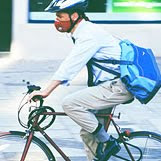 Or as TfL put it (illustrated by a weird picture of a cyclist with a helmet and a smog mask) the LCN was designed to encourage even more people to cycle while also improving conditions for existing cyclists.

However, after all the years of work and consultancy fees, and with 60 per cent of the network completed, there isn’t one complete north-south or east-west cycle route across Zone 1 of the English capital. That says it all, really, doesn’t it?

Jenny Jones’s idea that LCN+ was ‘on the verge of delivering a huge advance for cycle safety, especially in outer London’ strikes me as total garbage. In the first place, there was a telling critique of the LCN by Jeremy Parker as long ago as 1997. Parker was writing from the perspective of a committed vehicular cyclist, but he still had some very good points to make:

The cost benefit study for the London Cycle network is so unrealistic as to border on fraud. The LCN study assumes that the only switches to bike will be from cars. Nobody will switch to bike from bus, tube, or train. The LCN study assumes that the emptier streets from this switch will not fill up again with more cars (see Mogridge, "Travel in Towns", Macmillan, 1990, for a refutation of this).

Parker’s scepticism was justified. What evidence there is suggests that people in Britain who give up their cars switch to public transport, not cycling.

Even those who believed in the LCN were frustrated by what was happening during the era of the Livingstone administration:

The photo above shows a kerb buildout and entry treatment funded by the LCN+ in 2005 from the cycling budget. Not only has the buildout made the cycle lane go into the kerb but also a new pinch point on the bend, particularly dangerous as bendy buses are common on this route. The LCN+ has been so desperate for the City to finally spend some of its cycling grant that it has been willing to approve virtually anything. City Cyclists was not specifically consulted and think that the actions of the LCN+ and City here were an unjustifiable waste of taxpayers' money.

The LCN+ includes provision at junctions, measures on main roads, signed routes on back streets, contra-flows in one-way streets, cycle tracks and routes through parks.

The aim is to make it easier and safer to cycle between home and work, to shops, to school or college; to commute, refresh or socialise. It aims to give cyclists priority where possible.

Ah, yes – where possible. And we all know what that means, don’t we? Infrastructure will be supplied, but only if it in no way inconveniences or upsets motorists. Cycling will never have priority and will always be secondary to a car-centric transport culture.

This is why cycling to school continued to decline during all the years the London Cycling Campaign was cheering on the LCN.

This is why the London Cycle Network is complete crap and an utter farce and no one should mourn the passing of a project which gave cyclists dangerous infrastructure like this, where a car parking bay always took priority over a cycle lane, where drivers are allowed to park in cycle lanes seven days a week, where one metre wide cycle lanes are installed between parked cars and high volumes of lorries and buses, where LCN signing is flagrantly contradictory and where cyclists are required to take ridiculous detours.

The notion that more infrastructure like this was ‘on the verge of delivering a huge advance for cycle safety, especially in outer London’ reveals just how out of touch with the real world Jenny Jones is. Far from enabling cycling, the London Cycle Network is one of the reasons why cycling is still a minority activity in London.

But then Jenny is a leading member of the Green Party, which is no friend of cycling.

(Below) A section of the London Cycle Network delivering a huge advance for cycle safety and convenience on Church Hill, London E17. 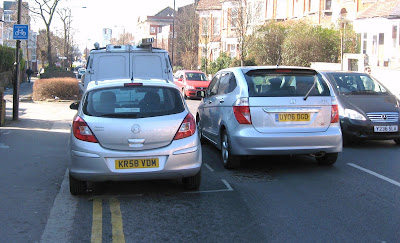 Posted by freewheeler at 14:56