‘Permeability’ is one of the buzzwords in cycling campaign circles. It refers to direct convenient routes for cyclists which incorporate short-cuts unavailable to motor vehicles. Permeability means infrastructure like cycle lanes through road closures, contraflow lanes on one-way streets, or off-road paths which avoid gyratories or other circuitous roads. In Walthamstow a good example of permeability is Clay Path, a pathway where cycling is permitted. Clay Path provides a useful short cut across Lloyd Park, between Winns Terrace E17 in the west and Bedford Road and the A112 in the east. Now read on… 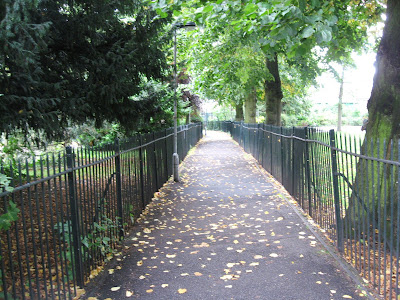 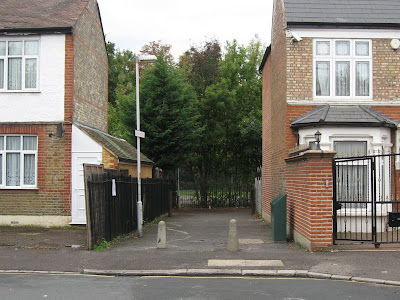 (Above) Clay Path at the Bedford Road end, with the path running west.


Waltham Forest council wants to close Clay Path after dark - that's the path which runs through the middle of Lloyd / Aveling Park, London E17. Close, as in stick a gate at either end and lock it up from as early as 4pm.

• Returning from work after dark? Take the long cut through scenic Forest Road.
• Walking your kids home from Winns Primary / Chapel End school at the end of a long day? The extra exercise is good for kids.
• Collecting children from the Lloyd Park Centre? Push your buggy along the narrow, congested pavement on Forest Road instead. Oh, watch out for those bus stops!
• Cycling through the park after dark? Take your chances in the 4 lanes of traffic on Forest Road instead.
• Walking to work bright and early through the park? They won't be opening it until 7:30am in the morning, or 9:00am on Sunday.

We say: Clay Path is one of the few pedestrian rights of way in Waltham Forest, and we want to improve it, not lose it. You don't have to be a planning genius to release what Clay Path needs is working street lighting, re-surfacing, and widening - not a total shut down after dark. The lottery money awarded to the park surely affords an opportuntity to do something decent, not something stupid.

But with characteristic contempt for walking and cycling Waltham Forest Council is proceeding with its crackpot scheme, once again underlining how things in this borough are comprehensively getting worse and worse for walking and cycling. With typical arrogance the Council hasn’t even bothered to measure use of this pathway by cyclists and pedestrians. It simply doesn’t care. The glaring contradiction with the pious aspirations of its climate change strategy document – essentially a worthless piece of trash – bothers no one. On pages 6 and 7 of the Council's fortnightly newspaper Waltham Forest News there's a lot of guff about the environment and requests for everyone to drive less and walk and cycle more, and then tucked away on page 18 in the 'Public Notices' is the small print: 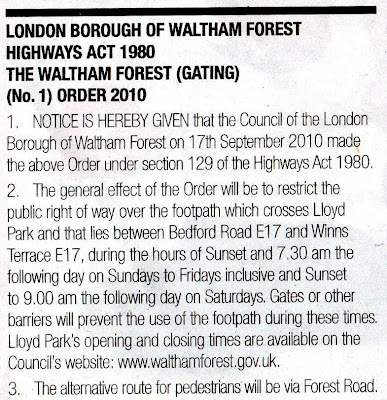 Cyclists who once cycled east along Clay Path after work will now have to go on a much longer route, emerging from Winns Terrace on to Forest Road (A503) at the exact spot where a cyclist was run down and killed by a speeding driver. Also bear in mind that in the recent past the Council has turned the roads surrounding the park into one-way streets: Brettenham Road, Carr Road, Winns Terrace, Bedford Road. This was done to maximise car parking and smooth motor vehicle flow. There are no contraflow lanes and the (in)convenience of cyclists was of no interest.

Let’s also consider the role played by the London Cycling Campaign, which on its website trills

Lobbying by Waltham Forest Cycling Campaign (WFCC) is helping to open up Lloyd Park to cyclists.

Waltham Forest Cycling Campaign (WFCC) successfully lobbied to get several paths in the park redesignated as shared use for cyclists and walkers.

The routes include the vital 'Clay Path' through-route, used by cyclists avoiding the perilous Forest Road and the convoluted one-way system to the north of Lloyd Park.

It’s a peculiar claim because Clay Path has always been admissible for cycling, and it’s even more peculiar now that the Council is shutting down night time use of the path. You might hope that the Waltham Forest Cycling Campaign was screaming its head off about this insane plan, and marshalling its claimed 400 members. Instead, not a squeak of protest, and the news section of its website is (with symbolic aptness) pretty vacant. But then I’ve pointed out the dismal failings of LCC campaigners on this route previously.

Let me sum up. A popular route for cyclists and walkers is to be gated and closed down from sunset to the next morning, even though the route is lit by lampposts and has been used by the public for over a century. With characteristic deviousness, the Council used a legal procedure which allowed no appeal to anyone but itself. There was public opposition to the scheme from local residents, which the Council has flippantly disregarded. All this scheme will do is further deter people from walking and cycling and make travel by car more attractive.

Anyone who seriously thinks that cycling in Outer London is going to increase from its dismal modal share of one per cent is delusional. Cycling in an Outer London borough like Waltham Forest is going precisely nowhere, and the increasing inconvenience and danger of cycling locally is likely to result in a reduction in cycling, not an increase. The fact that officers can get away with a scheme like this underlines both the mediocrity of the elected members of the borough and the weakness of supposedly ‘Green’ campaign groups, which continue to collaborate with farces like the Green Fair and Car Free Day, while the cycling and walking environment continues to be degraded, pinched and marginalised.

(Below) The route marked in red, with the Winns Terrace entrance on the left and Bedford Road on the right. 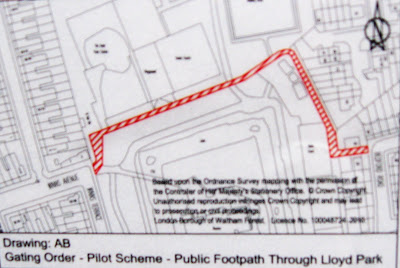 (Below) Clay Path facing east, outside the nursery. 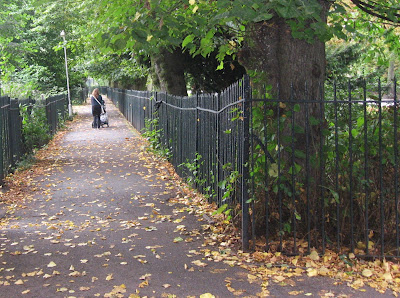 (Below) The Council employs the latest in digital technology to announce park closing times: 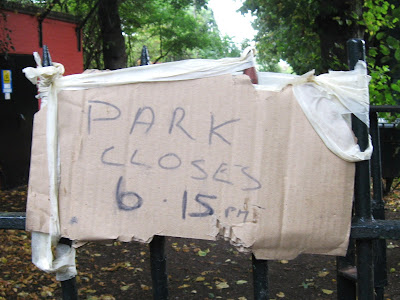 (Below) Stolen from cyclists. Bedford Road has been made one-way in this section by the Clay Path entrance (directly ahead) which leads through to Chingford Road (A112). But as any top member of the LCC will tell you, roads like this are just too narrow to provide cycling infrastructure. 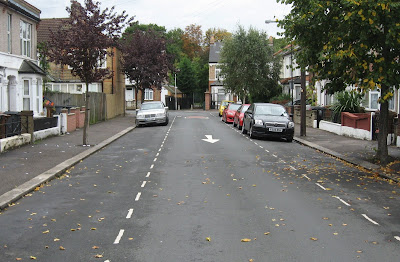 Posted by freewheeler at 09:33