Sky Ride: how was it for you? 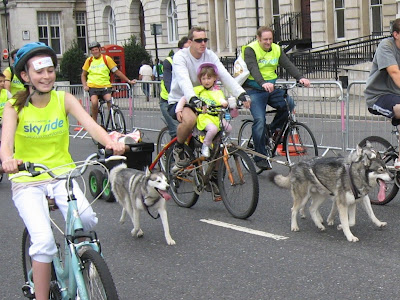 OK, so this guy wins the prize with his pack of huskies. But I expect he's Canadian, so we'll disqualify him.

(Below) Smart kid. You let mum and dad do the pedalling while you rest your feet on the crossbar. 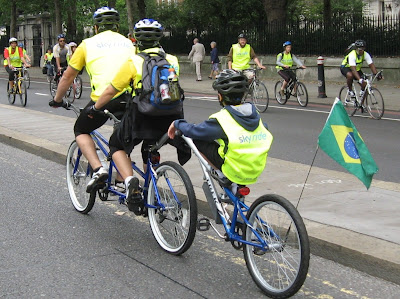 A Jeremy Clarkson nightmare. A major road entirely filled with cyclists in both directions. Victoria Embankment. 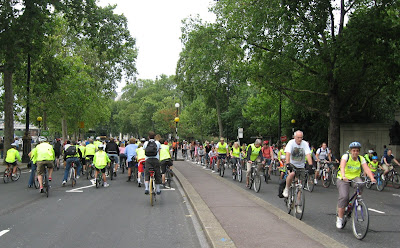 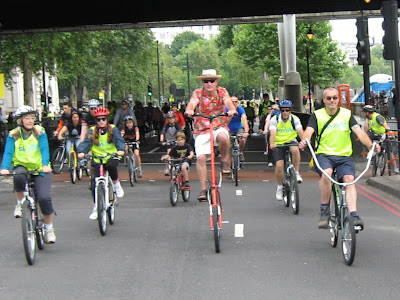 Some people appeared to be having more fun than others... 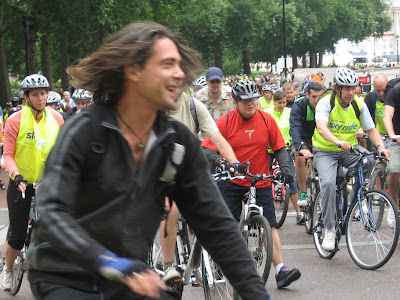 Outside Buckingham Palace. Come on, ma'am, where are you? Get out on that balcony and show your support. Although come to think of it I’ve never seen a photograph of any member of the royal family on a bicycle. 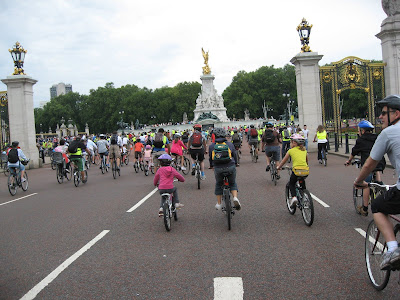 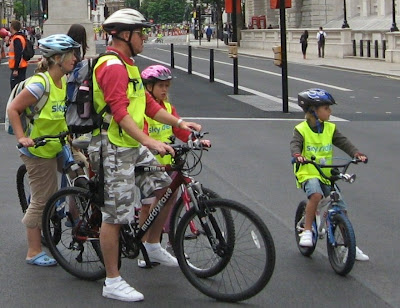 Sky Ride attracts too many bleedin' cyclists if you ask me. ST PAULS LOOP CONGESTED PLEASE PROCEED STRIGHT (sic) ON. Naturally I transgressed and ignored this advice. 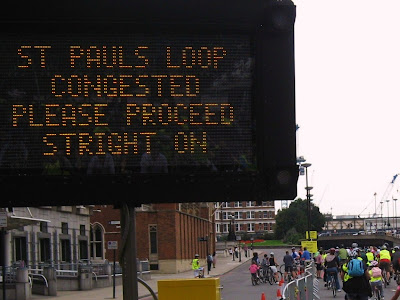 Ageing cycling hippies with amazing constructions should always be preceded by a small child with a red flag. 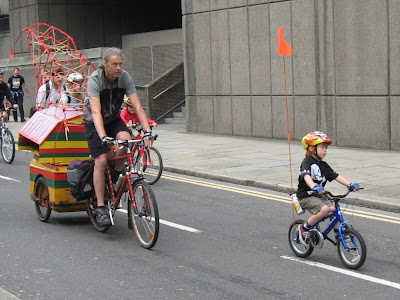 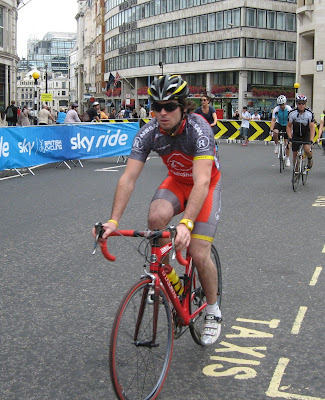 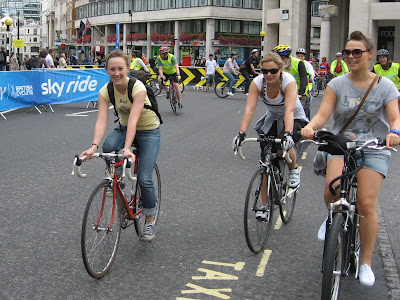 In the tunnel I encountered a woman transporting two young children in some sort of painted wooden tub on wheels. Apparently women like this are from Copenhagen. They can’t help it, they grow up in a society where this kind of behaviour is regarded as normal. And don't miss the unicyclist in the background. 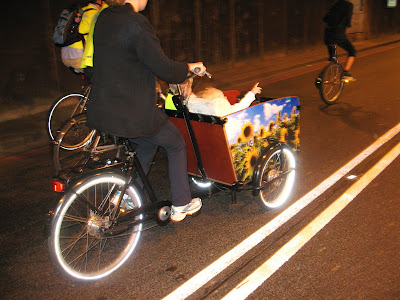 Oh. My. God. Mayor Boris Johnson was PERSONALLY there to give me a cheery wave. God bless you, Boris! 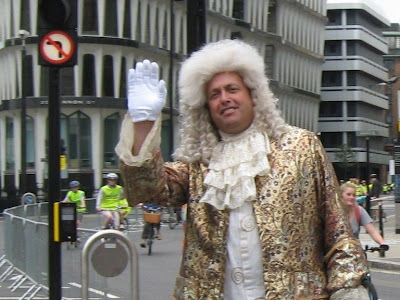 Sky Ride was a fabulous success in terms of the numbers it attracted. The route was choked with cyclists. A lot of people plainly had a very good time, especially families. If there is going to be a Sky Ride next year it needs far more roads closing off. The current route is simply not adequate for the demand, as was underlined by the sign asking riders not to take the St Paul’s loop because it was congested.

One major bugbear about cycling in London is the lack of safe, convenient, secure cycle parking, so I was amazed that a highly-orchestrated affair like Sky Ride seemed to lack any temporary cycle parking at all. No cycle parking was provided by the marquees and temporary toilets in St James Park.

The message of Sky Ride is that if you provide a safe, traffic-free environment people will come in droves. Unfortunately this is not the conclusion which will be applied by Transport for London, Boris Johnson or the London Cycling Campaign. Their message is to enjoy Sky Ride, get some cycle training, and then plunge into the world of vehicular cycling in London.

Sky Ride is ultimately nothing more than a gimmick. Even its route takes place on roads which are regularly closed off to traffic for parades and demonstrations. London as a city remains car-centric to the core and Sky Ride does nothing to address this. Boris Johnson and Transport for London are far more interested in prioritising motoring than they are cycling, and this transport culture simply isn’t prepared to re-allocate road space for cycling.

There is no opposition to this state of affairs from either the London Cycling Campaign or the Green Party, who are both equally clueless about how you get mass cycling. Both these campaigning organisations remain wedded to the failed philosophy that the bicycle is a vehicle and as such must share the roads with drivers. Cycling campaigners won’t see it that way, of course. They’ll convince themselves that Sky Ride is part of the momentum which is being built up which will result in London becoming a mass cycling city. This is wishful thinking. The demand which ought to come out of Sky Ride is for some completely traffic free cycling routes in London, seven days a week.

The reality of Sky Ride was summed up for me when I left the fenced perimeter and headed off home. At the first set of traffic lights I caught up with a family. The father was saying, "And now this is where it gets dangerous, so we are all going to ride on the pavement." And off they went.

I kept to the road and headed along the first unpleasant city gyratory and within two minutes had had my first bad experience with a driver, in this instance a homicidal coach driver. Nothing changes.
Posted by freewheeler at 09:06