Another lorry driver hits a cyclist and doesn’t stop

POLICE are appealing for witnesses after a teenager was knocked off his bike by a HGV in Heysham.

The 18-year-old was cycling from Morecambe towards Heysham along the A589 Heysham Road when he was clipped by the HGV at the junction of Seymore Grove at around 7.30am today (June 29).

The HGV didn’t stop and the teenager, who is from Heysham, fell from his bike suffering a number cuts and bruises. He was treated at Royal Lancaster Infirmary.

And now here’s the story of Mary Strutt. 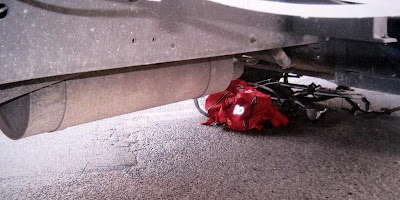 She recounted the terrifying moment when the lorry struck — crushing her beneath.

"I was conscious throughout and I felt the wheel running over my body," she said. "I heard the grinding, crunching sound as it went over me — and every time I close my eyes I hear it again.

"I thought I was going to die and so did the doctors. When I initially asked if I was going to survive, they said it was too early to tell."
Posted by Freewheeler at 19:48