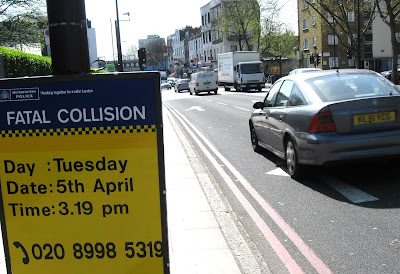 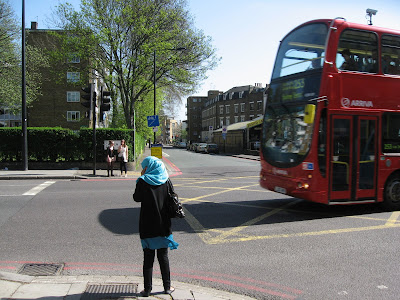 Camden Road, where a cyclist was crushed to death by a left-turning lorry. A four-lane highway for motor vehicles. No cycling reservoir (ASL). Not even a poxy cycle lane. And no crossing lights for pedestrians at three of the four arms of this junction.

After the death of cyclist Paula Jurek at this junction in Camden (there’s more here ) I made an FOI request to Transport for London asking:

What requests have been made to TfL in the past by Camden Council and others for improvements for cyclists and pedestrians to the junction of Camden Road (A503) and St Pancras Way (A5202)?

What has the response of TfL been to each of these requests?

Transport for London claims it is unable to answer these simple questions. This is the reply I’ve now received:

Under section 12 of the FOI Act, we are not obliged to comply with a request if we estimate that the cost of determining whether we hold the information, locating and retrieving it and extracting it from other information would exceed the appropriate limit. This is calculated at £25 per hour for every hour spent on the activities described.

We have estimated that it would cost approximately £625 to provide a response to your current request. Improvements along Camden Road have been investigated over the past seven years during which time many departments have reorganised and changed. We would need to retrieve information from accounts of employees that have left the organisation and assess and compile which information is relevant. Due to the volume of information held, it would take approximately 25 hours to retrieve, assess and compile the information you have requested. We may be able to answer your request if this could be narrowed down, for example to cover a shorter time frame or to include a specific department within TfL.

This response strikes me as evasive. I wasn’t asking about “Improvements along Camden Road” but about a very specific junction. A seven year time frame might be considered long if I’d been asking about every request for improvements made along the entire length of Camden Road, but I wasn’t. It’s also not helpful to be told I should have addressed my questions to specific departments within TfL, when I know nothing about the internal structure of TfL and TfL avoids enlightening me as to what the relevant department(s) might be. Computers also makes data retrieval very, very easy, since all you need to do is tap in key words to extract the information you require. I am not convinced it would require more than 25 hours at a computer to answer my questions.

It seems to me that TfL is being deliberately obstructive. After Paula’s death the claim was made that Camden Council had repeatedly requested improvements to this junction – improvements which TfL had repeatedly turned down. I find that entirely plausible, since this lethal junction is yet another embodiment of TfL’s car-centric obsession with ‘smoothing traffic flow’ at the expense of cycling and walking. But in the aftermath of a fatal collision TfL doesn’t want to own up to what requests it has turned down and what the rationale was (although I think I can guess: for example, putting in lights for pedestrians at the other three arms of this junction, including the two which cross Camden Road, would impede motor vehicle flow and ‘cause congestion’).

TfL is the enemy. London is now one of the most backward major cities in Europe, with polluted air and car-choked streets which are hostile to walking and cycling. The risible modal share that cycling has in Greater London is a direct consequence of the ways in which Transport for London continues even to this day busily designing its vision of London as a haven for maximum through-put of motor vehicles.

If you have any FOI requests to make of TfL just email them to this address:

enquire@tfl.gov.uk
Posted by Freewheeler at 07:33