welcome to the Stratford Soviet Olympics 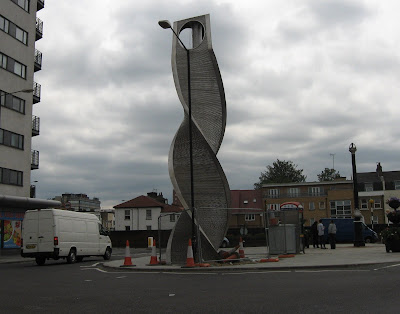 I presume this banal Soviet-style sculpture which has manifested on the roundabout outside Maryland station in Stratford forms part of the ‘Olympic legacy’.

I expect its name is ‘Spirit of the Olympics’ or some crap like that, though I prefer to call it 'Another empty bubble rises in the twisted mind of the arrogant and anti-cycling Newham leader, Sir Robin Wales.'

As the implications of the Olympic Route Network (ORN) sink in, unhappiness is spreading.

I’ve noticed that one of these exclusive ORN lanes runs across the end of the Greenway from Becton, where it connects with High Street, Stratford. If cyclists aren’t allowed to cross the road here – and this aspect of the ORN seems currently unclear – the implications are, well, interesting.

The removal of pedestrian crossings to accommodate the smooth traffic flow of limo-lifestyle layabouts from the corporate marketing industry is causing distress in some quarters. But large parts of Stratford won’t be affected at all, because under Sir Robin’s inspired leadership, pedestrians have traditionally been fenced in and prevented from crossing the road.

Just down the road from the new sculpture of Sir Robin’s brain is this imaginative road layout (Maryland Point), where the problem of drivers ‘losing control’ on the Stratford urban speedway system is addressed not by traffic calming or speed cameras but by crash barriers. It’s always comforting to cycle alongside crash barriers, is it not? And clever of that BMW driver to find a way along the pavement to a nice safe car parking spot. 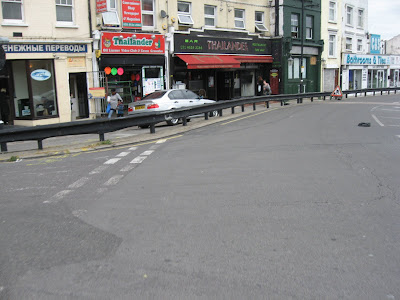 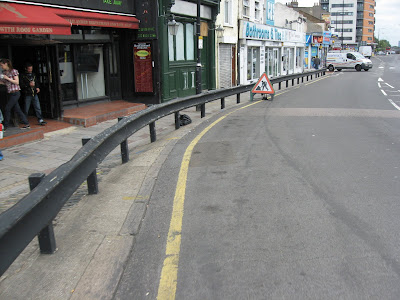 Posted by Freewheeler at 11:14