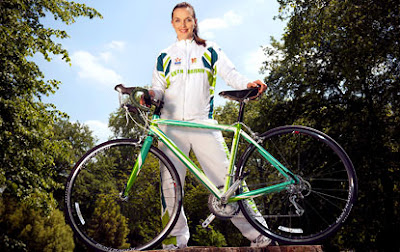 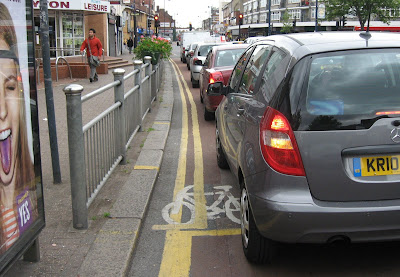 Bicycle Association chairman Phillip Darnton said: "We know that 77 per cent of people in the UK own a bike, but only 14 per cent use them regularly and a major barrier to people getting back on two wheels is often something as simple to fix as a dodgy brake or puncture.

Andrew Pankhurst, from Cycling Scotland, thinks that learning to fix bikes will get more people cycling. He said: “So many people have got bikes languishing in sheds, gathering dust, when just a few minor repairs would get them back out on the road again.

“People have concerns about the safety of cycling, but statistically it’s one of the safest modes of travel. It’s maybe more the fact that people don’t feel confident on the roads when they’re sharing it with other traffic. Cycle training is a fantastic way of getting your confidence up on a bike.”

The two examples cited above are perfect instances of what David Arditti means when he writes:

The longer Team Green Britain, or any of the other organisations in the Environment Issue Avoidance Industry that is most of UK cycle campaigning (and, yes, this means you, CTC and CCN) [Cyclenation, whose new Honorary President is Philip Darnton] keeps wittering on about how people are not cycling because they "lack training", or "lack confidence on the roads", or "don't know what to wear in wet weather" or "can't find the right routes" or "lack the skills to repair a bike", or any of these other bits of patronising tosh, the longer we delay solving the problem, the more years go by with derisory levels of cycling in the UK, the more money we waste on ineffective cycle promotion and pointless studies of cycling, the more people take up cycling and then quickly give it up again, the more people die of avoidable obesity-related health conditions and from the effects of pollution, the more we destroy our cities and countryside with motorways and concrete and car-parking, the more we live in de-humanised car-centric communities

In 2008 Cycling Scotland carried out a survey into why cycling had such a very low modal share in Scotland.

When looking at the solutions people suggested for overcoming the barriers identified for cycling, the overwhelming request seems to be for segregated cycle facilities, away from traffic where possible.
The graphs show that while there is a widespread opinion among cyclists and non-cyclists that some form of cycle specific route would encourage them to cycle more, the preference is clearly for off road facilities. Both groups felt that these would be more likely to achieve a higher growth in cycling levels.

Having made a discovery that was unpalatable to its notion of cycling, the organisation then, by a curious sleight of hand, converted it into something else altogether:

One thing that is interesting to note is that despite large numbers of people saying they would like to see less traffic on the roads, their suggested solution to this is segregated cycle lanes. People seem to assume that the prospect of reducing traffic on the roads is not a realistic option, but if we are to act on the wishes of a public who want less traffic, then maybe traffic reduction should be something for us to consider.

Ah, yes – making ‘traffic reduction’ the priority instead. Well we all know where that came from.

Now here’s something which needs to be printed out in large capital letters and stuck on the wall above the desks of the aforementioned encouragers of cycling.

Oh no, sorry. Today's Independent has a better idea for Bike Week.

Yeah, right. See if you can spot the helmet in the photo in the previous post below.
Posted by Freewheeler at 21:19