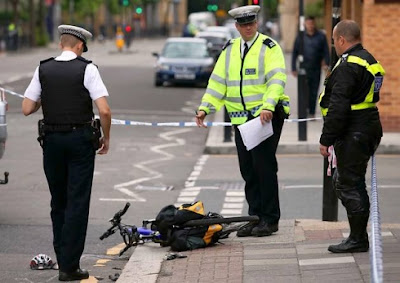 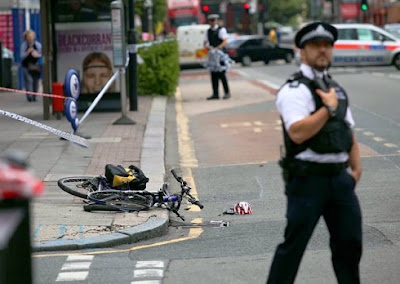 On Friday an elderly pedestrian was killed on a pedestrian crossing on Marylebone Road by a tipper lorry. The victim has now been named.

Yesterday a cyclist on Hackney Road was critically injured by a tipper lorry whose driver did not stop at the scene.

Police are appealing for witnesses to a serious road accident in East London yesterday when a cyclist was seriously injured in a collision with a tipper lorry.

The cyclist, in his 40s, is in a critical condition in hospital following the collision during the morning rush-hour in Hackney Road, Bethnal Green, at the busy junction with Prichard’s Row.

The lorry did not stop at the scene, Scotland Yard confirmed, but has since been traced. The driver has been arrested in connection with the investigation and given police bail pending further enquiries.

in East London at crossroads that nearby residents say has been made dangerous by road ‘improvements.’

The cyclist was taken to the Royal London Hospital with severe leg and pelvic injuries after the accident in Hackney road, Bethnal Green, outside the Days Inn Hotel.

Families on Bethnal Green’s Minerva Estate nearby are worried about safety where the road crosses Temple Street and Prichard’s Row and want Tower Hamlets council to take action.

“They widened Prichard’s Row when the hotel opened two years ago. This is when the danger started, because they moved a pedestrian crossing further away—which means traffic coming onto Hackney Road from the side streets gets blocked and can’t go ahead or turn right.

“As soon as drivers see gaps, they put their foot down and shoot across—you don’t see them and they don’t see you until the last second.”

The families say they have complained for several months.
Posted by Freewheeler at 15:05