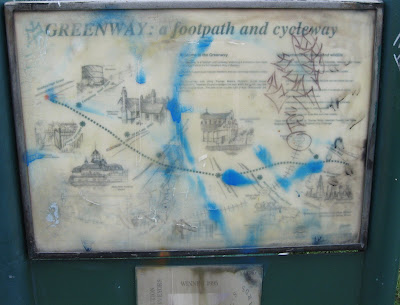 Today’s Evening Standard brings news of an £8 million, 37-mile Jubilee Greenway network that will guide spectators wishing to cycle between venues during the 2012 Games.

The map is deeply misleading. There is no continuous cycling route in the north east section. The Greenway route heading west from Becton terminates at the High Street, Stratford. It does not continue to the Olympic site but is closed until late 2014 by work on Crossrail. Cyclists wanting to access the Olympic Park will have to dismount and cross the road. However, one lane has been designated as a special Olympics lane which you enter on pain of a £200 fine. It is not clear how cyclists will cross to the other side. If they are somehow permitted to cross the multiple lane High Street, cyclists will then be expected to push their bikes along the footway for 400 metres to Pudding Mill Lane and follow a diversion to the Olympic site. At present parts of this diversion include the sign CYCLISTS DISMOUNT. However, when you get there you will apparently not be allowed to take your bike inside the site for ‘security reasons’. So you then cycle on to Victoria Park in Hackney, lock your bike, and walk back to the Olympic site.

In other words, don’t waste your time cycling to the Olympics. Go by jet pack.

(Below) The Greenway used to go in a straight line to the Olympic site. You can see the Olympic stadium in the distance. But now the route terminates at Stratford High Street and will not re-open until late 2014. 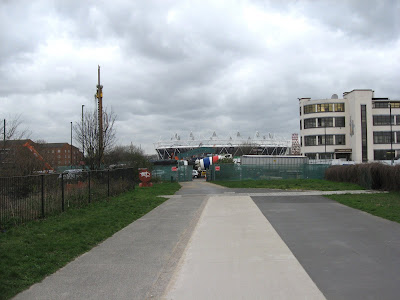 (Below) Welcome to the Stratford High Street urban motorway. If you enjoy cycling among lorries, this is the place to come. 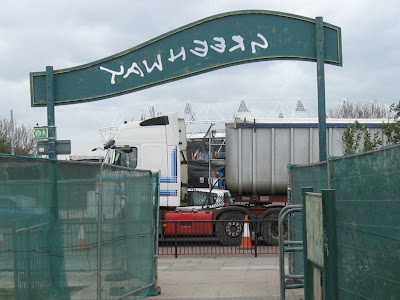 Posted by Freewheeler at 22:50