Down memory lane: Blackfriars Bridge and the CTC 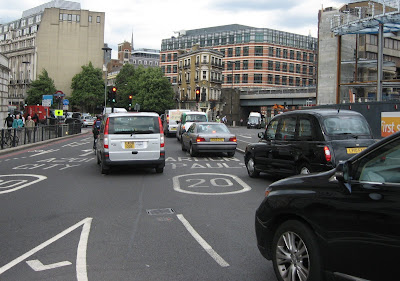 Blackfriars Bridge, north end, as it is now.

Vicki McCreery had predicted the journey home might kill her. Days before she was crushed by a five-ton bus, she had told friends a new cycle lane over Blackfriars bridge in London would claim lives.

As hundreds of people gathered for her funeral in north London yesterday, relatives demanded to know why a lane meant to protect cyclists from other road users had cost the 37-year-old physiotherapist her life. The lane had been in place barely two weeks before she died almost instantly following a rush-hour collision near the crest of the bridge

Safety campaigners are stunned that permission was granted for a narrow cycle lane sandwiched between two fast-moving carriageways and one of London's busiest bus routes. Worse still, a steady convoy of buses is allowed to veer across the thin path reserved for cyclists.

Roger Geffen, campaigns manager at the national cycling body, the Cyclists' Touring Club, said a cultural shift was needed so that local authorities considered cycle lanes more carefully. They had 'been left to the most junior planning officers, and we need better guidance on dealing with major junctions.'

Tony Russell, who advises councils on safer cycle lanes for the club, said: 'There are situations where designs put the cyclist in a more dangerous position. Most accidents, though, are caused by motorists not being careful.'

The article brings up problems with the position of CTC in the statements by Geffen and Russell. The author rightly attacks the British systems compared to the far better segregated bike engineering of The Netherlands and Denmark. But CTC has always tended to oppose the segregating of cyclists and motor vehicles on British roads, wrong-headedly (in my view) fearing it that creates more danger and marginalisation for the cyclist - when anyone who looks at the situation in continental countries can see that exactly the reverse is true - the danger and marginalisation occur here, where we try to combine cyclists and motors in the same unsegregated space, not there. Russell saying "most accidents are caused by motorists not being careful" is a silly statement as it misses the point. We all know that. The object of cycle engineering is to protect cyclists from the mistakes of motorists.

The CTC, of course, thinks that putting a cycle lane between two lanes of motor vehicles is best practice.
Posted by Freewheeler at 19:55