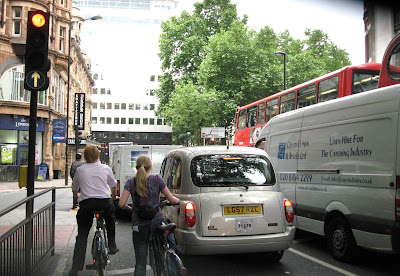 The health of tens of thousands of children could be at risk after it emerged that more than 1,100 schools in London are within 150 yards of busy roads responsible for high levels of traffic pollution.
The schools, from nurseries to secondaries, are near roads carrying 10,000 or more vehicles a day - a level leading European scientists claim in a new study could be responsible for up to 30 per cent of all new cases of asthma in children.

The figures, uncovered by the Campaign for Clean Air in London, also revealed that there are 2,270 schools within 400 yards of such roads.

Campaigners today accused Mayor Boris Johnson of failing to protect the health of Londoners and said he "has to act immediately to reduce the total number of cars on our roads".

Kulveer Ranger, the Mayor's director for the environment, said: "The Mayor recognises that road pollution is a serious health issue for Londoners of all ages."

Which is bullshit on an epic scale. Two examples of how TfL and the Mayor are promoting motor vehicle flow at the expense of pedestrians, cyclists, clean air, children's health, and a civilised London:

TfL's presentation reflects the Mayor's obsession with smoothing traffic flow rather than achieving modal shift towards more sustainable transport modes. Apparently removing the gyratory isn't a goer as it would require a 36% reduction in motor traffic in the morning forcing motorists to reconsider their mode of transport.

Unimaginable, doncha see. It's not desirable to reduce mindless motor vehicle use; we need to maintain the diesel particulate spewing, one person in a car, noisy central London experience.

TfL justifies the incredible decision to remove an existing pedestrian crossing on the equivalent of an urban motorway.

The decision to remove this pedestrian crossing facility has not been taken easily. We considered how many people use the crossing as well as how many vehicles pass through the junction. We want to ensure that pedestrians have safe, convenient footways and crossing points. However, we also have to ensure traffic flow is maintained.

Which as far as cycling is concerned, amounts to what another cycling blogger has referred to as the historical lack of any coherent cycling policy for London, going back for at least the last 30 years.

(Below) It would be totally impossible to introduce a segregated cycle path on New Oxford Street because its three lanes are needed for empty taxis. Transport planning in London is all about balance, you see. And smooth traffic flow. 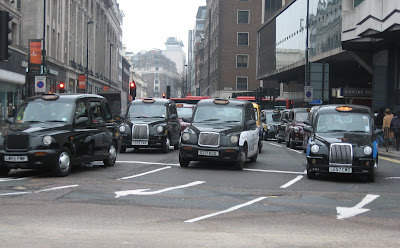 Posted by Freewheeler at 20:18