‘Bike week’ and crap cycling in Barnet, Oxford and York

Hey, let’s get in the mood by celebrating cycling in the London Borough of Barnet and two of Britain’s leading cycling cities, Oxford and York.

Barnet Council has created a Bikeless Borough. There is virtually nothing for cyclists in Barnet except cycling on the traffic-choked, boy-racer filled main roads and residential rat-runs. No cycle lanes, paths, parks, home-zones, nothing like that. In Brian Coleman's Barnet, there is no room for the bike. Bikes, as he said so clearly in his email to Camden Cycling Campaign, just get in the way. It will get even worse when the TfL/Barnet Council changes to the North Circularl/A41 junction at Henlys corner get built.

Whilst Oxford has a useful network of off-road cycle routes, and some other examples of good practice, overall the conditions for cycling compare unfavourably with European ‘cycling cities’. Cycle routes lack continuity, there is a lack of cycle parking, facilities are often poorly designed and the most direct routes along the main roads are intimidating for all but the most experienced and determined.

Oxford City Centre is already difficult to cross by bicycle. The existing restrictions on cycling along Cornmarket Street and Queen Street during the daytime sever the main North-South and East-West desire lines. As always in such circumstances (with cyclists or pedestrians) the rules are not well respected.

The alternative North-South route via New Inn Hall Street – part of National Cycle Network route 5 – is poorly designed for cycling and would need considerable work to make it a feasible route for journeys through the city centre for transport (as opposed to leisure) purposes.

York is one of the country's premier cycling cities, with traffic-free routes, quiet country roads and on-road cycle lanes. York provides the ideal setting for a leisurely family day out

Many of these fabulous on-road cycle lanes are protected by double-yellow line ‘no waiting at any time’ parking restrictions, so get your kids on their bikes and get stuck into family friendly cycling.

Cycling-friendly Gillygate (below) has a one-metre cycle lane. Perfect for a leisurely family cycle ride to the centre of town. 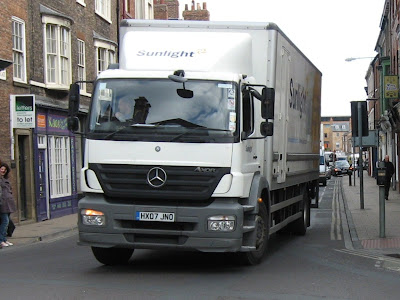 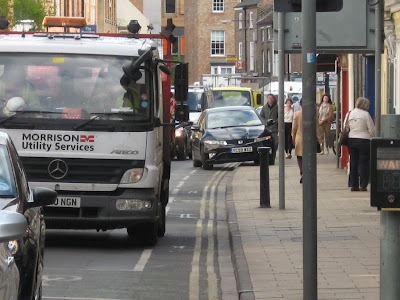 (Below) Let’s imagine you’ve turned into Bootham out of Gillygate with your partner and kids. The first thing you meet is the start of the cycle lane... 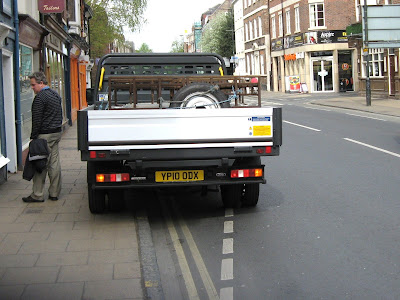 And in the space of a couple of minutes cycling you meet this and this: 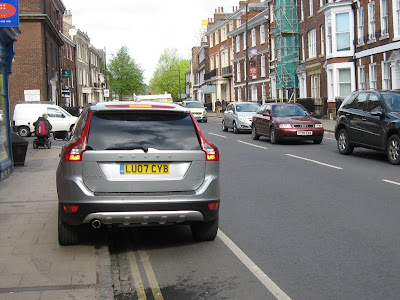 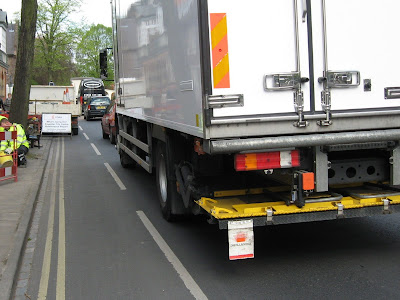 (Below) If you are heading back into the centre of York along cycling-friendly Bootham you'll have lots of opportunities to tell your kids how to spell 'articulated lorry'. 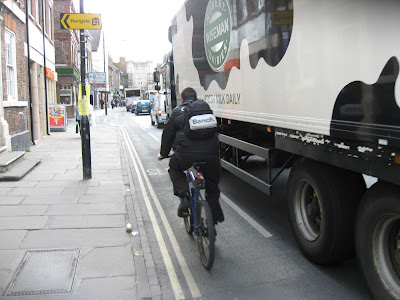 And if you are just a mere slip of a girl who doesn’t fit the demographic of rugged, courageous, helmet-wearing luminous-yellow vehicular cycling bloke aged 25-45, and you think York is a car-sick city crammed with useless, dangerous, unenforced cycle lanes…. then there’s always the pavement! 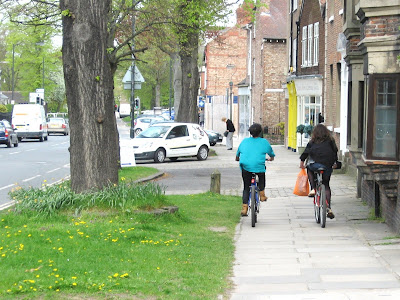 Finally, the reality that most British cycling campaigners and cycle campaign organisations and groups, as well as all UK transport planners including the ones in York, still doggedly refuse to acknowledge:

Q: To get more people on their bikes, what are the ‘must-haves’ in terms of cycling infrastructure?

A: No city in Europe or North America has achieved a high level of cycling without an extensive network of well-integrated bike lanes and paths that provide separation from motor vehicle traffic. Bikeways are the trademark of bike-oriented cities in the Netherlands, Denmark, and Germany. Bike paths and lanes must be combined with intersection modifications such as advance stop lines, special lane markings, extra turning lanes, and advance green lights for cyclists. Physical separation from motor vehicle traffic is crucial for enabling risk-averse and/or vulnerable groups to cycle. Virtually all surveys report that separate cycling facilities are needed to encourage non-cyclists to cycle, especially for women, seniors, and children. Those traffic-sensitive groups have high rates of cycling in countries such as the Netherlands, Denmark, and Germany, with their extensive separate cycling facilities, but low rates in countries where most cycling is on roads with heavy traffic and no separation for cyclists. Separate cycling facilities are a crucial first step toward increasing cycling and making it socially inclusive.

Got that? A crucial first step. Not just another item to add to a long list of aspirations in the traditional UK cycle campaign pepper-potting way.
Posted by Freewheeler at 10:18