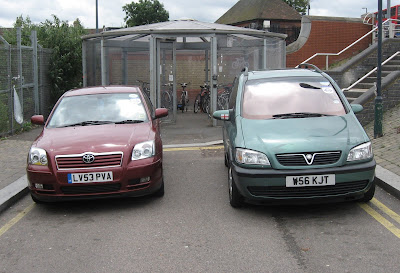 Last October I blogged about Leyton Bike Shed, comparing its provision with that found in the Netherlands. My post carried a photograph showing minicabs parked in the ‘no waiting at any time’ area, which includes the entrance to the shed.

When I went to the shed last week I was not unduly surprised to see the same two vehicles parked where they shouldn’t be (above). And the door, which is supposed to be closed, was wide open yet again.

And the automatic door is broken. The word ‘automatic’ has been crossed out and replaced by a handwritten sign which reads: UNLOCK + PUSH DOOR – PLEAS [sic] CLOSE AFTER.

And there you have it. A shoddy, substandard, poorly maintained facility, grossly inadequate in its provision, access to which is protected by parking restrictions which are daily flouted by the same vehicles. Very British-cycling, wouldn't you say? 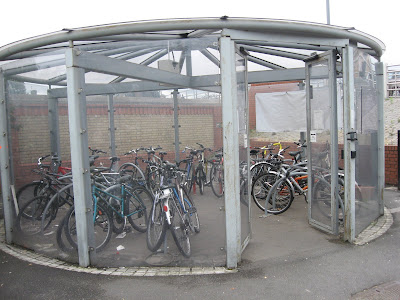 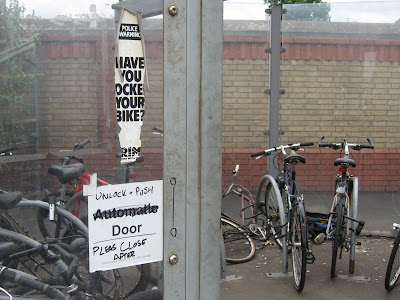 It occurs to me that the Leyton Bike Shed may well turn out to be the closest mass cycle parking facility to the Olympic site. And who wouldn’t want to leave their Brompton here and trudge off to the Olympic ‘Village’?

And talking of the Olympics, CycaLogical has spotted an aspect of the orbital Jubilee Greenway which I’d missed:

The other miraculous thing about this world-class cycling route is you won't have noticed any roadworks going on during its construction. That's because they haven't built anything. In the words of Jim Walker, director of the Jubilee Walkway Trust, "We have worked out there is already a route you can follow - it's not something we have had to build." Awesome.
Posted by Freewheeler at 13:13