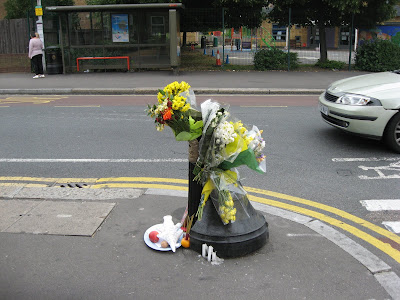 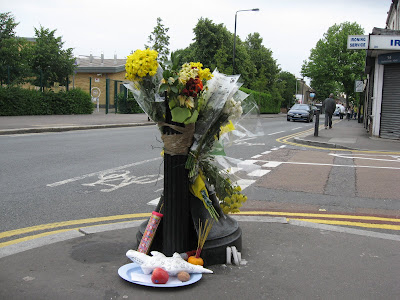 On Wednesday evening the emergency services were called to

the junction of Markhouse Road and Markhouse Avenue in Walthamstow following reports of a collision.

A female pedestrian was taken to an east London hospital with serious injuries.

The car involved in the collision, which is believed to be a dark coloured Mercedes C-class, failed to stop at the scene.

The woman, who was Vietnamese, died the next day but has not yet been formally identified.

Police want to trace the driver of the car, thought to be a C180 or C220 model, which was driven away from the scene towards Blackhorse Road.

This seems to be the first hit and run killing in the borough since a cyclist was run down and killed on Forest Road in 2007 (the driver was never traced).

The victim, whose identity is now known but which has not as yet been released by the police, was apparently in her twenties.

The crircumstances of the collision currently remain obscure. BBC News says she was run down on Markhouse Avenue, whereas the local paper says Markhouse Road. The local paper is more likely to be right, and indicates that the collision occurred somewhere between the traffic island by the Presbyterian Church and the junction with Markhouse Avenue. Four days after this fatal collision the Metropolitan Police have yet to put up a sign asking for information from any witnesses.

On the very limited information available at present it seems likely that the victim was crossing Markhouse Road when she was hit by the Mercedes, which was being driven north towards Blackhorse Road.

Markhouse Road (aka the A1006) is a lethal and barbaric road. It seems to have a massive crash record (I’ll use FOI to find out the details). It’s featured on this blog on a number of occasions. It has two schools on it (you can see the primary school playground behind the bus stop in the first photo above), churches and a leisure centre, as well as terraces of residential housing, yet the through-driver reigns supreme.

A major problem is speed. It is nominally a 30 mph road but many drivers are plainly exceeding that limit. The crap council’s idea of traffic calming is putting in traffic island/pinch points, which are no use to pedestrians (try getting stranded on one with two small children, or if you are old and walk with a stick), and which force even normal size cars into the crap advisory cycle lane.

The solution? It should be a 20 mph road, backed up by speed cameras. That’s the only way to do it. Unfortunately the idea of reducing speeds below 30 mph on an ‘A’ road is anathema to Britain’s car-centric transport culture.

At the very least the council should be ripping out those lethal pinch points and replacing them with zebra crossings. The council has a lot of latitude as this is not a road under the control of TfL.

Markhouse Road is the kind of road which deters all cyclists but those who are confident enough to cycle in such conditions. Me, I would always prefer to cycle on crap Hoe Street, where in daytime the congestion ensures much lower vehicle speeds, than on Markhouse Road, where vehicles travel much faster and come much closer.

(Below) The junction where the crash occurred. 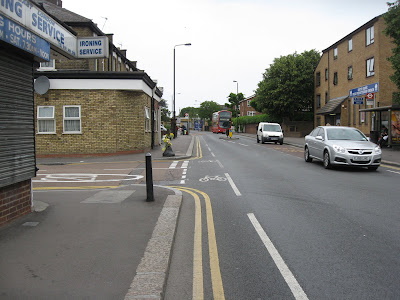 (Below) The crash site. Which is also an example of how to design road infrastructure that forces drivers into the cycle lane. 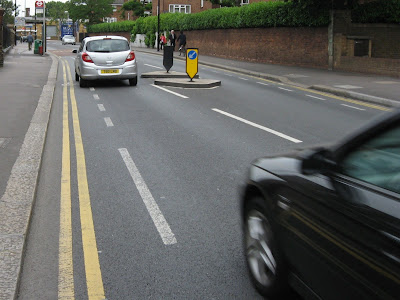 (Below) While I was taking photographs a cyclist came by - on the pavement. If you don’t provide safe, convenient infrastructure for cyclists, some people will decide to find their own. 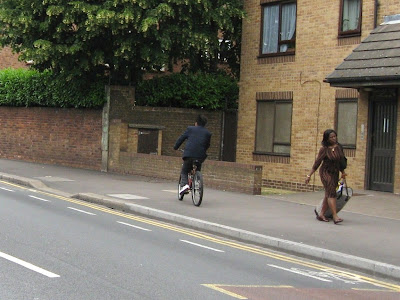 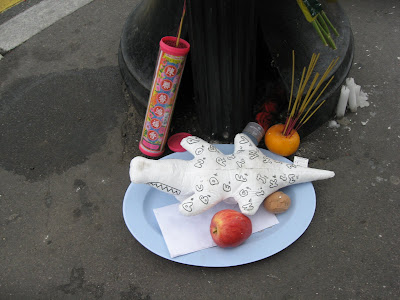 TWO arrests were made yesterday following a woman’s death after a hit and run crash.

A dark blue Mercedes C200 Kompressor, believed to be the vehicle involved in the crash, was also traced after the fatal incident occurred at 10pm on June 1, at the junction of Markhouse Avenue and Markhouse Road.
Posted by Freewheeler at 17:00