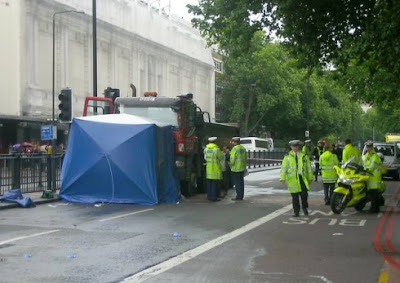 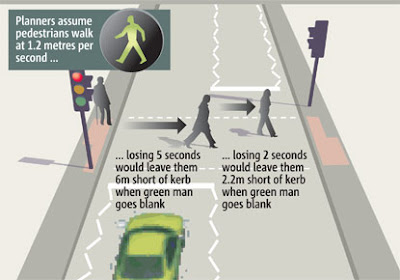 A woman in her 90s has died after being hit by a lorry on Marylebone Road at about midday on Friday. It is thought the woman was crossing the main road at a pedestrian crossing when the incident occurred.

The driver of the lorry has been arrested on suspicion of causing death by dangerous driving.

A number of things strike me about this latest central London fatality. Firstly, the type of lorry involved. It looks to me like a tipper truck – the kind of lorry which seems to have a much higher rate of involvement in fatal collisions involving pedestrians and cyclists than some other types of lorry. Unfortunately the name of the haulage company involved can’t be identified in the photograph. Recently my spine has been kept regularly chilled by sightings of Thames Materials lorries in Waltham Forest and those tipper trucks weren’t green but red. Very probably the lorry involved in this latest fatality wasn’t a Thames Materials tipper truck but it would be useful if someone like the London Evening Standard’s estimable Ross Lydall could find out. Secondly, the circumstances bear some resemblance to the killing of an elderly pedestrian in Hackney in March.

But setting aside the question of the specific circumstances of this collision and the vexed issue of lorries in central London, there’s an aspect of this fatality which is intimately connected to the ongoing Blackfriars Bridge struggle. Because what happened on Marylebone Road yesterday was Network Assurance in action. Marylebone Road is a hellish road for cyclists and pedestrians because it is totally devoted to the smooth flow of motor vehicles.

Take note of this comment under another report on this crash:

I have worked next to Madame Tussauds for over 20 years and both these pedestrian lights and the ones at the junction of Baker Street are far too short for pedestrians to get across in time without taking your life in your hands. Westminster Council need to look into this as a matter of urgency.

But even if Westminster Council wanted to (which it wouldn’t), it couldn’t, because this road lies outside of its control. It’s a strategic route run by Transport for London – you know, like Camden Road, where pedestrians are left to cross four lanes of motor vehicles without any assistance whatever.

I would be very, very interested to know if this fatal crossing is one of the ones included in this programme, announced two years ago:

Traffic lights are to be re-phased and some will give more time to vehicles at the expense of those on foot.Up to six seconds of pedestrian crossing time could be lost at as many as 6,000 sets of lights across the capital.

If the answer is ‘yes’ (and I have a hunch it might be) then I think it’s time to start shouting from the rooftops that Boris Johnson and TfL are slaughtering pedestrians and cyclists, apart from injuring doctors.

That’s why the battle for Blackfriars Bridge is so important. TfL simply must not be allowed to put the speed limit back up to 30 mph.

TfL’s traffic modelling is intellectually incoherent and irrationally car-centric, and as Danny says it wouldn't be too much of an exaggeration to say that TfL's traffic models are killing people.

The time for protest has come (actually, many protests, taking many different forms - there are three quite separate inspirational suggestions to be found here).

throughout the document it not only doesn't mention speed limits, it exclusively refers to 'speed' as a positive aspiration and not once does it refer to excessive speed of traffic as a problem. The tone of the document is almost all traffic flow - that is - more, faster motor traffic.

This document effectively allows TfL to continue to ignore cyclists, because there is nothing in the strategy that requires them to consider cyclist safety or even cycle journey times when designing roads. In short, this is a recipe for more Blackfriars Bridge junctions, rather than an attempt to fix the historical strategy which has been an attempt to create urban motorways wherever possible.
Posted by Freewheeler at 12:29