Eight cyclists on Blackfriars Bridge: what they tell us about cycling culture in Britain 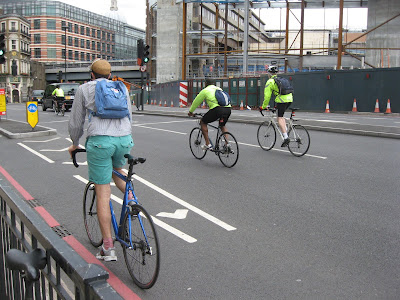 I happened to be on Blackfriars Bridge on Friday afternoon and I took some photographs. When I looked at them it occurred to me that they reveal a lot about cycling in Britain.

First of all, take a look at the pic above. Four cyclists. They were riding fast and with confidence. Nearest are three male cyclists and in the distance is a woman cyclist. Two of the cyclists are wearing helmets; three are wearing high viz gear; the three males are all riding road bikes with skinny racing tyres, no panniers, and no mudguards (except for a rear mudguard on one bike). Two of the male riders have drop handlebars. The woman is riding a more normal utility bike with panniers. All four cyclists are riding alone; they are almost certainly commuter cyclists. They were probably all in the age range 25-35. Two of the male cyclists are wearing lycra shorts. In one sense the cover of the latest issue of London Cyclist is spot on. People like this dominate London cycling (a statement which is a description, not a moral judgement).

A moment later I spotted four more cyclists coming in the same direction over the bridge, all on hire bikes. They were evidently a family - mum, dad, and two young teenage children. My guess is that they were visitors to London. They were cycling in the relaxed fashion you see in the Netherlands - a cluster of people in normal clothes, without high viz gear or helmets. 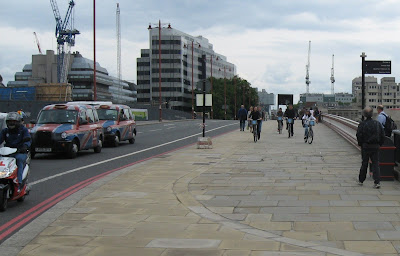 The only difference, of course, is that they were shunning London's cycling infrastructure and using the footway instead. Their logic is not hard to understand: cycling on the footway felt safer, there were no traffic lights to hold them up, and they could cycle alongside each other. And who knows - maybe they made it as far as Westminster Bridge, and had an agreeable pedal back along the South Bank to their docking station. Or maybe they met someone in a dark uniform who gave them penalty notices, deterring them from ever going near a bike again in nasty, scary London...

By the way, look carefully at the pic above and you'll see a powered two-wheeler displaying an 'L' plate, who has already discovered that using a mandatory cycle lane to undertake motor vehicles is something you can do tens of thousands of times without fear of any enforcement. 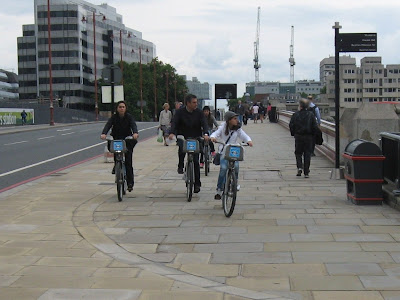 (Below) Only a very confident and assertive cyclist is prepared to cycle in conditions like this: 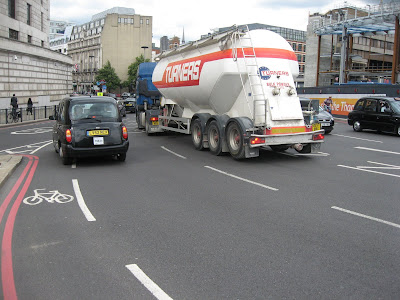 Blackfriars Bridge is a cycling route which is not only subjectively very dangerous, but is also objectively dangerous: 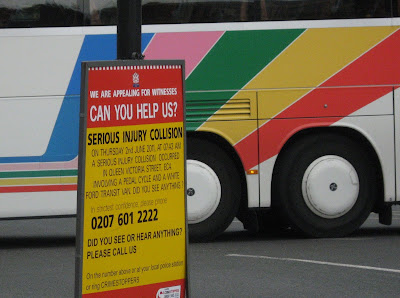 The battle of Blackfriars Bridge is, of course, now notorious.

What is to be done? Personally I think retaining a 20 mph speed limit and tinkering around with the design at the north end would be a very dismal outcome which would fail to change the reality that Blackfriars Bridge is only for the fearless cycling commuter. In that sense people like Futilitarian are quite right. But if TfL and Boris Johnson aren’t even prepared to yield even on the issue of a 20 mph limit, then pragmatically this makes a very good battlefield, because it draws together a very broad range of opposition. Victory for a permanent 20 mph limit on Blackfriars Bridge can then be followed by the demand for this speed limit on ALL the central London road bridges. This would need to be followed by more protests, demanding enforcement, because the existing 20 mph limit is plainly being flouted. After that? Cycle tracks on all the major routes in London. Easy-peasy.

Incidentally, notice how much of the 'traffic' in the background to these photos consists of black cabs.
Posted by Freewheeler at 11:07