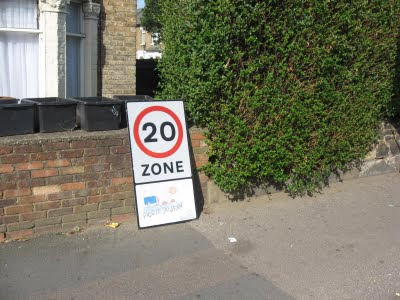 Peter Hawkins, of the Cycle Touring Club Scotland, said: "Cycling is hard to promote to non-cyclists because it appears unsafe because of the behaviour of drivers. Twenty miles per hour should be the norm for all residential streets and a maximum of 30mph on main roads. Enforcement is lax – speed limits are widely disregarded."

However, the Institute of Advanced Motorists called instead for other measures, such as segregated cycle lanes. "Investment in high-quality cycle routes that separate inherently unsafe cars and bikes is needed rather than unenforceable speed limits in areas which are already safe. People cycle in Holland because they don't have to worry about traffic conflict anywhere on their journey."

Needless to say the AA and RAC are against 20 mph zones. The ubiquitous Edmund King thinks they only work where drivers “understand and respect why the limit is lower” – which cleverly leaves obedience to road traffic law to the discretion of the driver. And

The IAM is right in believing that segregated cycle lanes on the Dutch model are the only thing that will result in safe, popular cycling, but wrong in opposing 20 mph zones, since they bring benefits to pedestrians, who have blatantly been left out of the discussion here. But building that kind of segregated cycling infrastructure means getting rid of on-street car parking, which I suspect is not something the IAM would enthusiastically endorse.

As for the AA and the RAC - they are simply doing the archetypal whining they do whenever any restraint is suggested on the lavish freedoms of drivers to behave however they want to. And the RAC Foundation is just another tax-dodging “charity” which exists to promote the politics of car supremacy, even though charities are supposed to be non-political.

However, I think Peter Hawkins of the CTC is wrong if he believes that 20 mph zones in themselves are enough to increase cycling and make it a mass, popular means of personal mobility in urban areas.

Waltham Forest has a number of 20 mph zones and driver speeds are often relatively low. But cycling in 20 mph zones is still frequently an unpleasant and stressful activity, because it involves cycling on roads choked with parked cars lining the street on both sides, with drivers either honking their horns angrily behind you out of frustration at being delayed for a few seconds by a cyclist, or approaching/overtaking you at a speed which still seems threatening. Having a ton of metal pass by you just a few inches away is not pleasant, even if that ton of metal is “only” travelling at 20 mph. Very few drivers show any willingness to accept that when they are approaching me on my side of the road I have priority and they should give way and slow down or stop. The vast majority simply expect the cyclist to give way, and some drivers assert their metallic strength and superiority in the most aggressive way possible. The physical proximity of a moving motor vehicle is the problem, not just the speed.

These kinds of experiences underline (for me at any rate) that the integrationist strategy which many cycling campaigners still believe in, is not getting us anywhere. I used to be an integrationist myself, but not any more. However, I will leave the issue of integration versus segregation to a future post.

For the moment let me point to an aspect which usually gets left out of the discussion. Many campaigners believe that 20 mph zones are implicitly a good thing in themselves. In one sense that’s obviously true – better any kind of traffic calming and speed reduction than none, and there is no shortage of evidence that, measured by casualty figures, they are a success. But do traffic-calmed 20 mph zones really keep speeds down to below 20 mph? The Church Hill area of Walthamstow was recently traffic calmed and turned into a 20 mph zone. However, I am sceptical that driver speeds are really below that limit.

My subjective perceptions are implicitly confirmed by a very interesting report by Southwark Living Streets suggesting that 20 mph zones may not be quite as effective as they are supposed to be, and that frequency and type of traffic calming measures is crucial in determining success or failure.

The report scrutinises streets in a traffic calmed 20 mph zone, where, depending on the street, between 32 per cent and 86 per cent of vehicles are being driven at speeds faster than 20 mph.

Read the report here.
Posted by freewheeler at 08:31