Secretary of State for energy and climate change, Ed Miliband MP, will be visiting Walthamstow to talk with residents about cutting carbon emissions ahead of the Copenhagen summit.

Labour prospective party candidate for Walthamstow, Stella Creasy, who organised the event, said: “It is vital the political leaders at the Copenhagen summit make a deal which cuts carbon emissions internationally otherwise floods, famines and pollution will blight the lives of millions of people here and abroad.

The event is at Willowfield School, in Clifton Avenue, Walthamstow, between 6.30pm and 8.30pm today.

I made the effort to get there by 6.30 pm. Checked out the stalls. Read some literature. Waited for the action to begin. Wondered why so few people were there. Eventually learned that the Minister was now not turning up until 8 pm.

A pity. I would like to have asked him: ‘Minister, when Boris Johnson came to Walthamstow recently he cycled all the way from City Hall on the south bank, alone. How did you get here tonight?’

I think I can guess the answer.

I expect the speech I missed would have been a version of this one.

Oh yeah, one other thing. Bearing in mind that this was a meeting for people who live locally about the urgent need to cut carbon emissions I was not remotely surprised that the school car park contained three bicycles and fifteen cars. Here’s a lovely picture. 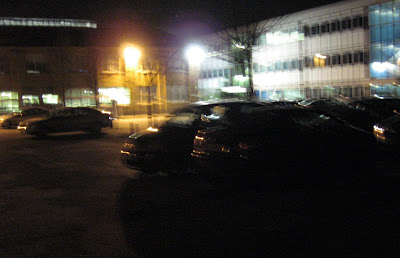 Posted by freewheeler at 09:10