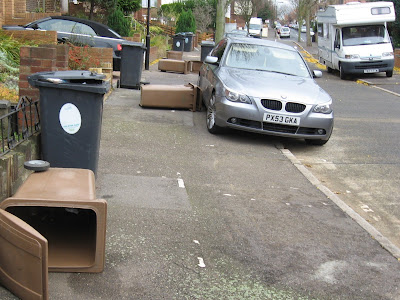 (Above) A windy day on pedestrian-unfriendly Carnanton Road E17. All photos taken yesterday.

The London Borough of Waltham Forest’s ‘Environment & Regeneration’ section, under the underperforming and ludicrously overpaid Martin Esom, is a cancer on the body politic of the borough. It is aggressively pursuing a policy of creating more and more free parking spaces in residential areas, which is madness in itself. What is even worse is that these spaces are being created at the expense of cyclists and pedestrians.

It is unbelievable that in London in the year 2009 road space is being re-allocated from pedestrians and cyclists for car parking, and yet that is what is happening under the borough’s five ‘improvement schemes’. This is dragging us backwards, not taking us forwards. It also makes it very, very difficult ever to create in the future the kind of infrastructure which David Hembrow describes on his blog. Likewise, at this rate London is never going to provide an infrastructure like Copenhagen's. There is simply no such vision on the part of either transport planners or politicians in any of the three main parties; at best, cyclists are given low-cost, fragmentary, piecemeal provision.

Jack of The Bike Show:

The tragedy in the London Borough of Waltham Forest is that even where space currently exists which would allow for the creation of such cycle lanes without upsetting car owners, it is even now about to be seized for car parking.

I have previously analysed The Forest Road Corridor Scheme and The Wood Street Corridor Scheme, today let me draw attention to the Bellevue Road Area E17 ‘improvements’. This area is a grid of streets locally known as Upper Walthamstow, forming a rectangle bordered by Forest Road in the south, Pentire Road E17 in the north, Beacontree Avenue in the east, and Hale End Road in the west.

The major impact of the proposed ‘improvements’ will fall on Carnanton Road, Grantock Road and Beacontree Avenue. On the first two streets existing footway parking bays will be altered but it is hard to assess the significance of this as no measurements are supplied and the plan provides no ‘before’ and ‘after’ comparisons, except for Beacontree Avenue.

The striking thing about the first two streets is not just how footway parking degrades the walking environment and results in obstruction, but how many of the houses possess off-street parking. There is no ‘need’ for footway parking at all. Supplying it simply encourages single household multiple vehicle ownership.

Between Grantock Road and Carnanton Road there are two public footpaths. I only checked out one and it was unlawfully obstructed. The body responsible for maintaining it is, needless to say, the London Borough of Waltham Forest, which has repeatedly displayed its contemptuous indifference to maintaining its public footpath network, signing it, or encouraging use of it. Walking simply isn’t important to Martin Esom and his car-crazed officers.

Worst of all is what is proposed for Beacontree Avenue E17. Here, the existing narrow pavement on the eastern side will be stolen for car parking. The Council’s consultation document claims ‘there will be no loss of footway space as the proposals will be achieved by building out the kerb line’. That pious claim is totally at variance with the plan, which indicates the effective loss of this pavement (see below). Ironically, although in The Forest Road Corridor scheme it is claimed that narrowing the road will magically reduce traffic speeds, on Beacontree Avenue the narrowing of the road will include the introduction of chicanes to reduce speed.

Needless to say, no research whatsoever has been carried out into cycle flow in this area, even though cyclists use these streets to travel from Highams Park/Hale End Road to access Woodford New Road and Woodford. The scope for segregated cycle lanes on the Dutch/Copenhagen model is obvious, and yet instead road space is being re-allocated for car parking bays, promoting multiple car ownership and yet greater car dependency and use. Narrowing the road and forcing cyclists to pedal between rows of parked cars and in close proximity to moving vehicles is unlikely to result in significant numbers of non-cycling Londoners taking up cycling.

The other day, referring to the implications of a major decline in the world’s supplies of oil, George Monbiot said I'm beginning to feel like a madman with a sandwich board

I know the feeling, George. Here in the London Borough of Waltham Forest the madmen have taken over the asylum, and it’s cars, cars, cars and car dependency that are the future, not pleasant, safe streets for walking and cycling. 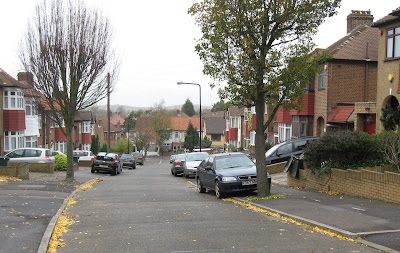 (Below) Grantock Road, where houses have off-street parking. 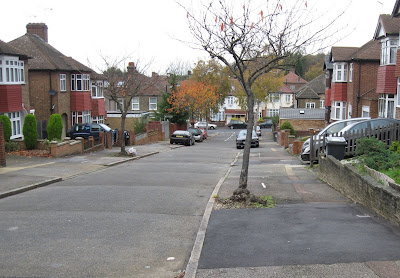 (below) The obstructed public footpath between Grantock Road and Carnanton Road. 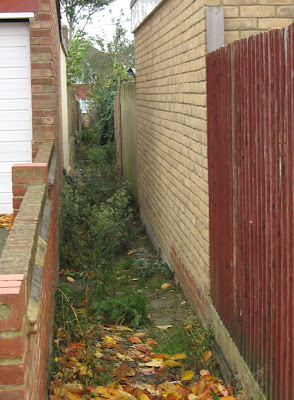 (Below) The east side of Bellevue Road, to be re-allocated for on-pavement parking bays. This is the area at the top of the plan, with the camera at the top far left, looking right. The pavement extension is marked in green, with the new parking bays marked out in hatched blue lines. 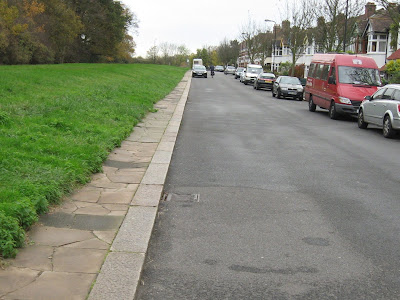 Posted by freewheeler at 07:58